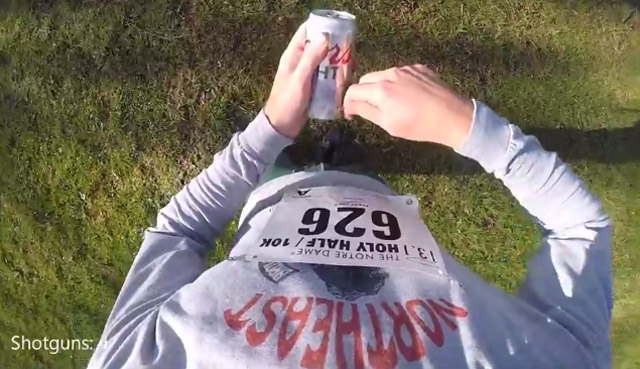 Emmet Farnan, a senior at Notre Dame and former high school runner from Long Island, decided to try to achieve the impossible. Okay, not the impossible exactly, but he did achieve something pretty amazing.

Purchasing a bib off a fellow student days before a half-marathon was to be run, Farnan decided to up the degree of difficulty by slamming 13 beers along the way – one for every mile he completed.

Not only did Farnan chug the 13 beers, he also managed to finish the race in an eye-popping 1:43:42. He says that the time may be better than one would expect because it sure was better than he expected.

The fact that I couldn’t drink 13 beers without falling asleep, let alone run 13.1 miles while doing so, certainly impressed the hell out of me.

Naturally, Farnan filmed his legendary feat by wearing a camera and chronicling the whole thing. (He skipped most of the boring parts – like the running.)