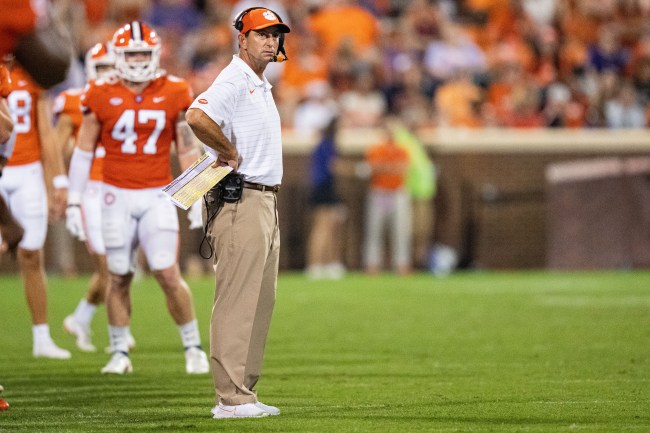 As college football fans enjoy one of the craziest college football transfer seasons in recent memory, there is one person who isn’t quite as happy. As it turns out, Clemson’s Dabo Swinney is not a fan of the transfer portal or current NCAA transfer rules.

Dabo, on the transfer portal: "It's chaos right now. Tampering galore. Adults manipulating young men. Education is like the last thing now." Calls for the return of one-year sit for transfers, and get that year back upon graduation. "Keep the focus on graduation/education."

The college football world is definitely not on the side of Saint Dabo on this one.

yea im sure if bryce young said he wanted to go to clemson right now dabo would be appalled https://t.co/fnFtFPQDGO

Some on the internet think this is a sign that Clemson could struggle to keep themselves at the top of the college football world.

Clemson better get a hold of Dabo. It’s a new world in College athletics. If they don’t adapt… pic.twitter.com/TxquVwU40N

Dabo Swinney is doing a hell of a job torpedoing his Clemson football program https://t.co/WIH6GY9zex

It’s not surprising to hear nobody agree with Dabo. Manipulating young kids is what college coaches do. It’s how programs like Clemson and Alabama end up with so much depth on their roster.

A lot of that talent on the bench would never sign with these programs if they knew they would never have a shot at a starting spot. Instead, they buy into what these adults are selling them.