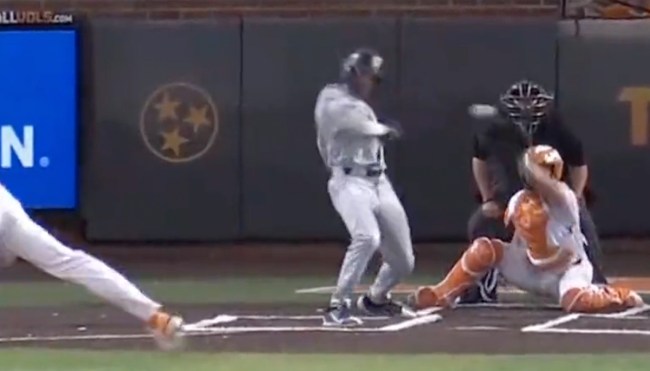 Pitching is an art built on a foundation on a variety of skills, and while players may not be able to survive on speed alone, being able to consistently top the 100 MPH mark has traditionally been a pretty good way to dominate the game and make a name for yourself in the process.

That’s exactly what Ben Joyce has done during a season where the University of Tennessee reliever has pitched a total of seven innings over the course of the ten games he’s appeared in this season, where’s he’s managed to keep opposing teams scoreless while only surrendering four hits.

The biggest factor in Joyce’s success is his ability to throw some absolute gas with the cannon most people refer to as a “right arm.” Earlier this week, a number of notable names in Major League Baseball took notice after he topped 103 MPH on the radar gun against South Carolina, and now, he’s back in the headlines after claiming another fairly unfortunate victim.

Joyce served as a one-man wrecking crew during Tennessee’s showdown against Butler earlier this week, as he somehow managed to break his belt while warming up and came dangerously close to breaking the face of the home plate umpire whose mask was directly on the receiving end of a 102 MPH fastball.

Ben Joyce, throwing so hard he Destroyed his Belt on his last warm up pitch.

And, then hits the HP ump in the mask with 102mph on his 1st pitch. pic.twitter.com/zmGtKTvdo7

The ump was thankfully able to emerge unscathed, and while that’s usually a very good way to ensure you’re working with a smaller strike zone for the rest of the game, the Volunteers (and the man dubbed their “Fireman”) still walked away with a 13-3 win.