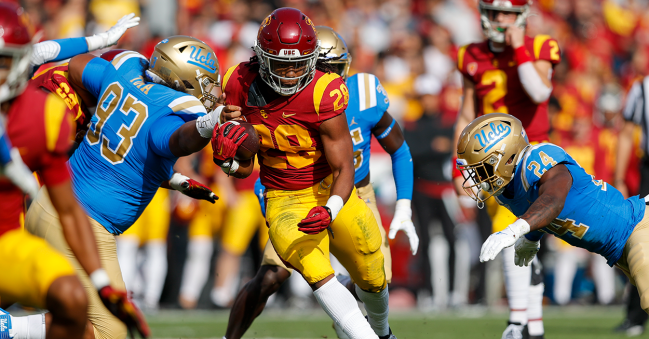 When USC and UCLA left the Pac-12 for the Big Ten, it send shockwaves across college football. There has been a ripple effect of ongoing and continuous attempts for larger, more expansive conference realignment as the eventual emergence of two super conferences seems inevitable.

In the meantime, the Pac-12 is scrambling to account for the massive financial repercussions that will stem from the Bruins and Trojans’ departure. It was not a good thing for the conference.

The premier collegiate athletics conference on the West Coast is losing USC football and UCLA basketball. Not only that, but the direct windfall from the Los Angeles media market is no longer in existence. At least, after the move is made official in a few years.

However, Colorado athletic director Rick George is not too concerned and is choosing to take the glass half full approach. He met with local media on Wednesday for the first time since the two L.A. schools made the stunning announcement two weeks ago and took a vicious shot at both schools in the process.

“So everybody is clear, we didn’t lose any team that has appeared in a College Football Playoff game,” George said.

The Pac-12 has produced two participants in the College Football Playoff since its inception in 2014. Oregon lost to Ohio State in the 2015 National Championship game and Washington lost to Alabama in the 2016 CFP Semifinal. A Pac-12 team has not reached the Playoff since, which is part of the reason why the conference is at such a crossroads.

So while Colorado AD Rick George’s comments are valid and hilarious, the Pac-12 is scrambling and Pac-12 ADs and school presidents have met via conference call on an almost daily basis.

As for George’s belief on how to move forward, he reiterated that the remaining 10 teams in the Pac-12 need to present a unified front.

“Our focus is going to be on keeping our conference aligned,” he said. “We still have the strength of our conference with the 10 schools. I feel really good about George (Kliavkoff, the Pac-12 commissioner) and what he’s doing. I can tell you the ADs are aligned on where we think this needs to go. We’re bullish on the future. We think there’s a lot of strength with the 10 schools. We’re really just focused on staying aligned and moving forward with the 10 schools we have. I think George has done a really good job collaborating with us. We’ve met consistently for the past 10 days, 11 days.”

“I feel like we’re in a really good place. Our thing is we’ve got to keep our conference stable. We’re doing that and the ADs are committed to making sure the 10 of us stay together and we’ll see what the future brings in the days and weeks ahead.”

There have been a lot of rumors about various schools leaving for a variety of different conferences. Colorado was even included in them at one point, with a potential jump to the Big 12 swirling in the background. George is aware of his options and is prepared for anything.

“We’ve had so much happen in the last three years,” George said. “We’ve had so much hit us, you’ve got to be nimble and you’ve got to be able to move forward regardless of what happens out there. Do I feel confident in our 10? Yes. Could something change? Yes. When something changes, we’ll react to it. But we’re not going to react to rumors or innuendos that are out there. We’re going to react to the real life things that are going on. If something else happens, we’ll be able to meet that challenge, whatever it is.”

As conference realignment continues, it will be interesting to see whether George continues to stand behind the unified front.