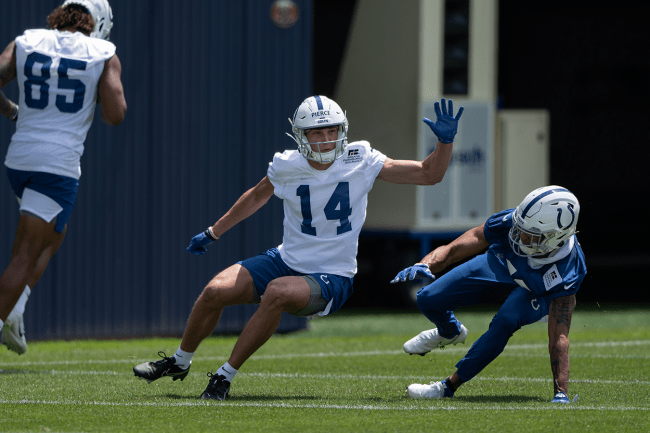 With their second round pick in the 2022 NFL Draft, the Colts selected wide receiver Alec Pierce out of Cincinnati. The 22-year-old Illinois-native is set to play a big role in the Indianapolis offense as a rookie, especially with first-year quarterback Matt Ryan.

Over the course of his four years with the Bearcats, Pierce only got better as his career went on. During his sophomore season he caught 37 passes for 652 yards. As a junior, during a COVID-shortened season, he caught 17 balls for 315 yards in six games.

And then, in 2021, Pierce burst onto the scene as Cincinnati played its way into the College Football Playoff. He caught 52 passes for 884 yards and eight touchdowns.

Pierce was crucial to the success of the Bearcats and he was Desmond Ridder’s favorite target and leading receiver by more than 300 yards. He was also the team’s leading pass-catcher by 18 receptions.

While Pierce’s on-field play is one thing, his intangibles are another. He is faster than quick and was a track star in high school.

During the NFL Combine, Pierce ran a 4.33-second 40-yard dash. That is speedy for anyone, let alone someone who stands 6-foot-3, 213 pounds.

Bearcats are flying this week! pic.twitter.com/9HJ5JVbhzu

He also played volleyball in high school and put on a show during the vertical jump portion of the NFL Combine, reaching a position-high 40.5 inches.

Cool look at @GoBearcatsFB Alec Pierce’s Combine-best 40.5 VJ (among all WRs). Plenty of talk right now about potential first round wideouts but @ajpierce00 has higher ceiling than most of them. The Day 2 run at WR is going to be fun. What Round 2-3 WR do you want for your team? pic.twitter.com/mpJ2QJtixQ

An old video of Pierce’s training has recently gone viral and it’s rather ridiculous. He can jump out of the gym.

As a second-round pick, Pierce recently got paid.

The Colts opened their rookie camp last week and Pierce looks good in blue and white.

First look at @alecpierce in the blue and white. pic.twitter.com/z1uSaSojue

First look at the #Colts rookies:

And since arriving in Indy, he has been nothing but impressive.

I considered not tweeting this because I know the replies will be extreme in either direction, but…

Alec Pierce had some moments of dominance in today’s Colts rookie camp practice. Absolutely killed it in the red zone. 👀

Alec Pierce has been dominant in #Colts rookie minicamp. He’s not going to leave the field much his rookie season.

Obviously, there is no telling how Pierce will adjust to the real, on-field pace and physicality of the NFL this fall. But based on his college tape, athleticism and first week with the Colts, he is on his way to finding success on the next level.

ESPN’s Louis Riddick went so far as to say that he could win Offensive Rookie of the Year.