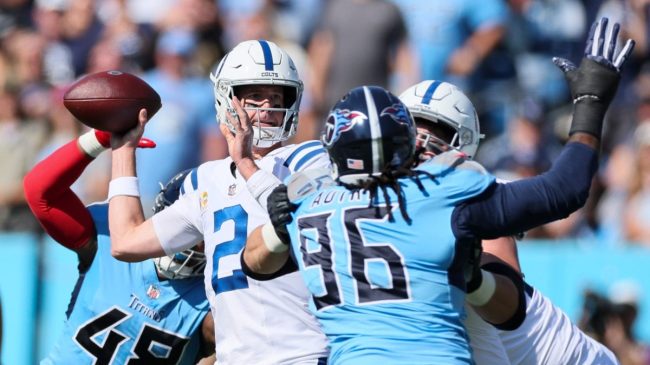 The Indianapolis Colts couldn’t get anything going on the Tennessee Titans on Sunday. It was a horrible showing for this team as they’ve struggled mightily throughout the season so far. Now, it appears the coaching staff is making a surprising change at quarterback, as Matt Ryan hasn’t lived up to the hype this year.

According to Ian Rapoport, Indianapolis has already named Sam Ehlinger the starting quarterback for the Colts’ next game against the Washington Commanders. Hopes were high for Ryan to get the team out of the rut, but he’s failed to do so with multiple interceptions and fumbles.

Major move for the #Colts: They announce that QB Sam Ehlinger will start Sunday vs the #Commanders.

This isn’t a great look for this organization. General manager Chris Ballard has traded away valuable draft picks in the hopes of acquiring a veteran quarterback to lead the Colts. Instead, it’s resulted in failure after failure. Now, Indianapolis is going to give Ehlinger a shot, as Matt Ryan just hasn’t met par at all this season.

We’ll see how this all plays out for Indianapolis. Sam Ehlinger is a young quarterback and could prove to be surprisingly good. However, it could turn the Colts’ season from bad to worse immediately.

We’re halfway through the year, so Indianapolis is certainly trying everything they can to possibly maintain relevancy. The Colts’ season is in jeopardy though and the future has become incredibly murky. Keep an eye on this franchise, as Frank Riech’s time as a head coach may depend on how his team finishes the year.