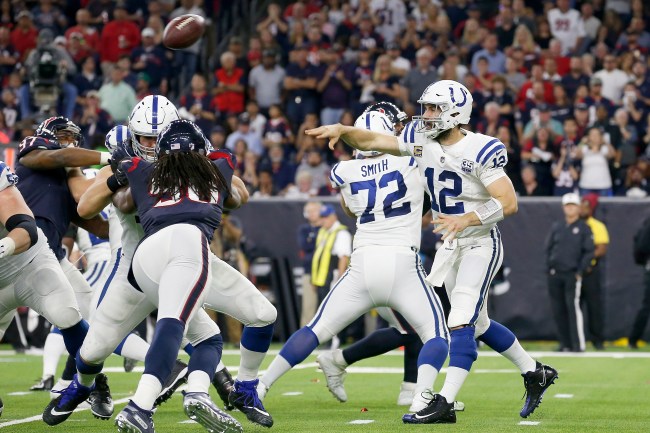 Andrew Luck appears to be done with football.

Tonight, ESPN’s Adam Schefter revealed that the longtime franchise QB told team owner Jim Irsay that he was retiring from football because he was mentally worn down from his latest injury.

Filed to ESPN: Andrew Luck has informed the Colts he is retiring from the NFL, per source. There will be a press conference Sunday to make it official, but Luck is mentally worn down, and now checking out.

Breaking: Andrew Luck has informed the Colts he is retiring from the NFL, a league source tells @AdamSchefter.

There will be a press conference Sunday to make it official, but Luck is mentally worn down, and now checking out. pic.twitter.com/9qwpWjfdYX

Luck is on the sideline during tonight’s Colts game.

Andrew Luck smiling on the sideline with teammates around him, like the entire social media world isn't freaking out about his retirement. pic.twitter.com/ayl9z12Jxt

The Internet was shocked regarding the news.

Taking this time sending my prayers to Andrew luck man y’all don’t know how much we put in for this sport, yes it’s draining but than we love it so much at the same time…… #LoveLuck

(Yeah yeah yeah we know not New York sports but WHAT!?!?!) pic.twitter.com/gpWDdXCnqD

Me when I heard the news in the middle of eating dinner #AndrewLuck pic.twitter.com/PHFOHE5Pd9

The Andrew Luck news just hit us in the press box like a ton of bricks.

colts fans when they hear the andrew luck news pic.twitter.com/a5W1iZXQmz

When you drafted Andrew Luck in fantasy pic.twitter.com/VHXNSdemqD