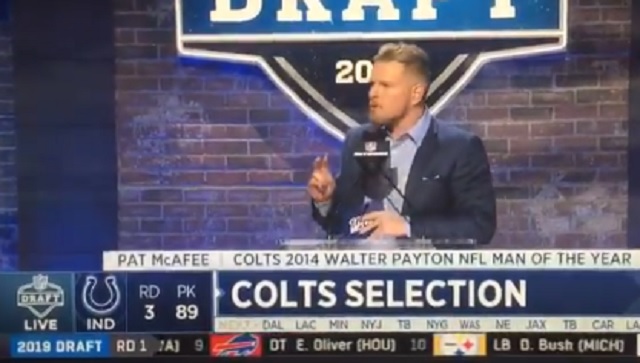 The NFL draft is being hosted in Nashville, Tennessee this year which has led to a number of former AFC south rivals to come to the city to troll Titans fans.

Tonight, former Colts wide receiver Reggie Wayne started things off by ravaging the booing Titans fans in the audience as he announced the team’s second round pick.

Thanks to Reggie Wayne, the Titans have already fallen to 0-1 for the 2019 season pic.twitter.com/hWSWPq9yGy

“I’m not going to say anything about the Titans record against the Colts because I’m a punter and there’s no need for me to talk about that.”

“That said, we didn’t punt much against the Tennessee Titans.”

The Internet approved of the savagery displayed by the two former Colts players.

Nashville will have to rebuild after the #NFLDraft is over because Reggie Wayne and Pat McAfee just destroyed the place. Who's the next former Colt to drop a bomb on them? Vanderjagt?

Just send Reggie Wayne and Pat McAfee around the state to promote the Colts. They'll sell tickets and fire up the fan base.