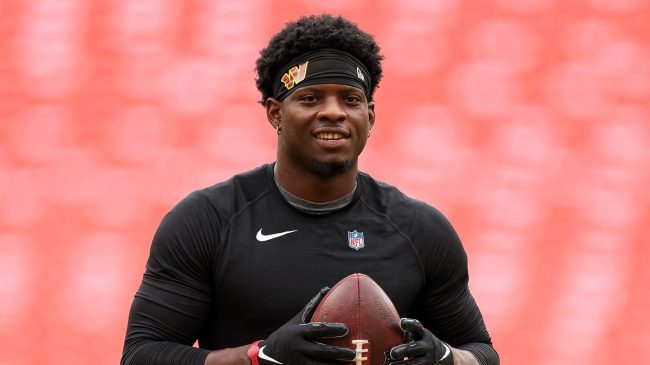 The Washington Commanders are set to face off against the Philadelphia Eagles. It should be a fun NFC East showdown, as both teams aim to take an early lead in the division. However, all eyes are on Brian Robinson, as he seems to be making a rather quick return after getting shot in the preseason.

According to Nicki Jhabvala, Robinson was running routes with the team during pregame warmups on Sunday. He’s not active for the game, but this is exciting news for the Commanders’ running back. Brian Robinson looks solid out there, as he seems close to returning sooner, rather than later.

Commanders RB Brian Robinson Jr., who was shot twice during an armed robbery attempt less than a month ago, is out here running routes. 🤯 pic.twitter.com/7wOHWeDaY3

Roughly a month ago, Brian Robinson was shot during a carjacking. He luckily didn’t suffer any serious injuries and has made a quick recovery. The Commanders were extremely excited about Robinson throughout the preseason, as reports had him winning the starting running back job in Washington.

We’ll see exactly what his role will be once he officially returns to games. Antonio Gibson has played well to begin the season while JD McKissic has helped in the passing game. Regardless, Brian Robinson will likely have a job in the backfield, giving the Commanders a solid trio of running backs to work with.

Keep an eye on this kid for now. He’s currently on the PUP list and won’t be cleared to return until Week 5. So, Washington will have to make do with their current running backs until then. However, Robinson’s recovery has been amazingly fast, which bodes well for his future in the NFL.