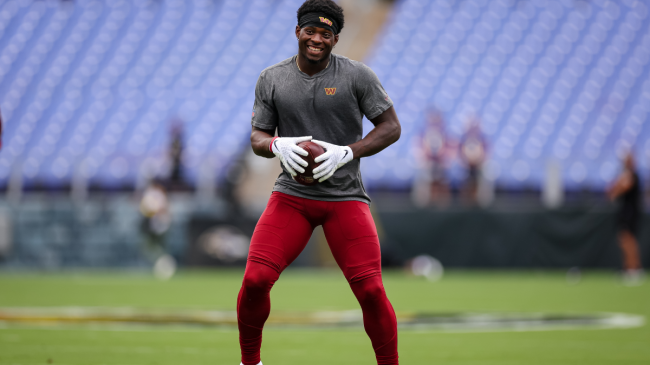 Washington Commanders running back Brian Robinson continues to make strides after being shot this offseason. The rookie out of Alabama was taken in the third round of the 2022 NFL Draft, but an off-the-field setback put a halt to his season outlook.

Robinson was involved in a carjacking that resulted in non-life-threatening injuries after he was shot in the leg. After a successful surgery, there was optimism that he could get back to the field quicker than anticipated. Still, there was no timetable for a return.

He appears to be doing everything in his power to make his debut.

Robinson was at practice for the first time on Wednesday, and now, he’s done the unthinkable. Thursday, he was seen running agility drills on the ladder, and looking pretty impressive in the process.

The NFL’s social media account posted a video of Brian Robinson running drills on Twitter. Take a look as he continues to get closer and closer to game action.

Fans were certainly excited to see the running back continuing his progress.

Robinson looked to be on his way to playing a key role in the Washington offense, posting numbers of 14 carries, 57 yards, and a score in two preseason games. Unfortunately, the carjacking cut that productive preseason short.

Folks are eager to see him suit up, and they’re impressed with how quickly he’s worked back.

This fan said, “bro got shot in the knee 2 weeks ago and he’s already back, wow,” to which someone responded, “dedication for the game he loves, glad to see him back.”

dedication for the game he loves, glad to see him back

Another fan said, “I was cheering for him before…but more so now.”

We definitely can’t wait to get him back on the field.