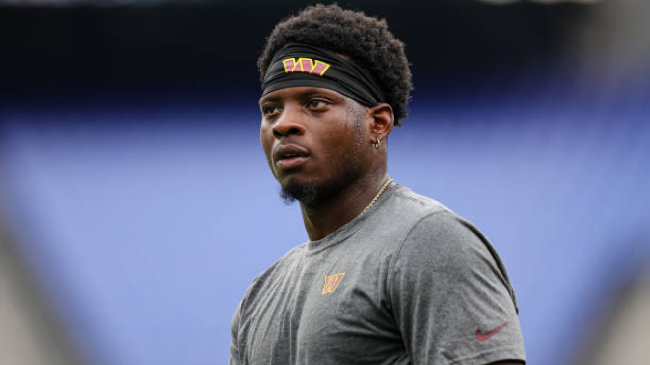 It didn’t take long for Brian Robinson to become a player that NFL fans were keeping an eye on. There were many who believed that Robinson had already earned an important role for the Washington Commanders early on in the preseason.

Unfortunately, his rise up the Commanders depth chart was brought to a shocking halt when he was shot shortly before the start of the regular season.

Despite that shooting coming only 2 weeks ago, it seems like Robinson may already be getting close to being ready to return for the Commanders as Robinson was seen riding the stationary bike at today’s practice.

Commanders RB Brian Robinson is out here for the first time since getting shot. He’s on the stationary bike. pic.twitter.com/uo2M8wfN0m

Robinson was placed on the PUP list as a result of the injury he sustained in the shooting, but with how quickly he has been able to get back to practice, it looks like there’s a chance he doesn’t miss much more than the 4 required weeks.

Before Robinson was shot, he appeared to be making a strong case to be the starting running back for the Commanders despite the fact that Antonio Gibson had held that job for the past couple of years.

That job may still be waiting for Robinson when he returns as Gibson wasn’t overly impressive in Week 1 against the Jaguars.

It’s good to see that Robinson’s recovery is going well after such an unfortunate delay to the start of his NFL career. Hopefully it won’t be too much longer before he is able to make his regular season debut and return to fighting for the RB1 role for the Commanders.