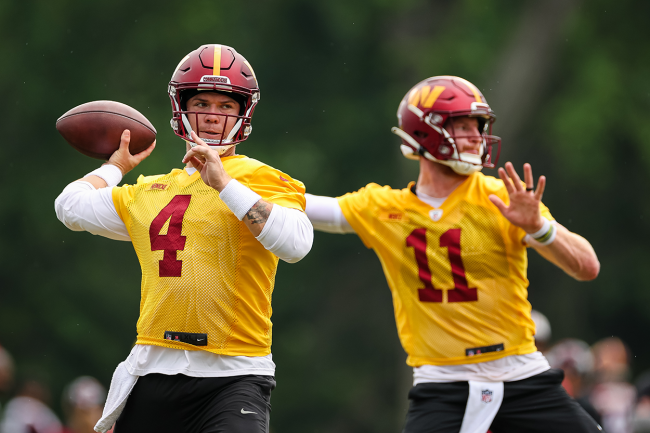 Taylor Heinicke isn’t throwing in the towel on being named the starting quarterback for the Washington Commanders, he’s just being realistic. The 29-year-old says that it comes down to money.

Heinicke was a standout star at Old Dominion but didn’t hear his name called in the 2015 NFL Draft. Since then, he has been something of a journeyman.

After two years in Minnesota, a year in Houston, a year in Carolina, a year off to finish his engineering degree and then a year in the XFL, Heinicke found a semi-permanent home in Washington. He has been with the team since 2020 and has become a valuable backup.

In his first season with the team, Heinicke took over for an injured Alex Smith in the Wild Card game against Tampa Bay. Although Washington lost to the eventual Super Bowl champions, he completed 26 of 44 passes for 306 yards and rushed for a touchdown that kept the significant underdogs in the game.

Heinicke proved his worth in the Wild Card game and signed a two-year extension with the team in February. That quickly became crucial as starting quarterback Ryan Fitzpatrick got injured in Week 1.

As a result, Heinicke took over the starting role for the rest of 2021 and led the then-Football Team to a 7-10 record with a 65% completion rate, 3,419 yards and 20 touchdowns through the air, and 313 yards rushing. It wasn’t great, but it was not expected to be a particularly successful season in the DMV area.

Now, as the Commanders look ahead to 2022, Heinicke does not believe he has a chance to earn back his starting role for the fall.

During the offseason, Washington traded for Carson Wentz. He is the presumed starter, which demotes Heinicke back to the second spot on the depth chart.

And he knows it. While meeting with the media on Wednesday, Heinicke revealed the shockingly honest reason that he won’t start this fall— money.

“Carson’s a great quarterback and you see it through OTAs and minicamp. And I hope he goes out there and succeeds. And again, my job is just to back him up. Hopefully, he’s on his deal, help him out in whatever way I can, and if for some reason he goes down, I’m ready to go play. That’s how I look at it. But, again, the NFL’s a business. You’re paying a guy a lot of money, you’re paying him money for a reason. He’s gonna go play.”

Now, everyone is thinking it. It’s 100% true. But to hear a backup step up to the podium and flat out say it is uncommon.