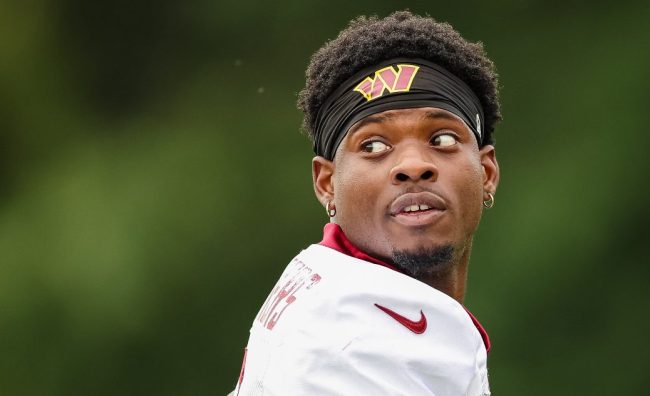 The sports world was turned upside down on Sunday night after the Washington Commanders’ rookie running back, Brian Robinson, was shot in a carjacking. It was a scary situation as the only information given was that the wounds weren’t life-threatening. Now, it sounds like Robinson could bounce back sooner than expected as Ron Rivera and the media provide an inspiring update about his injury.

Commanders RB Brian Robinson May Return In The 2022 Season

The Commanders head coach, Ron Rivera, is extremely optimistic about Brian Robinson’s current status, per ESPN. “The doctors were very positive with him and he was very positive as well. He’s very fortunate. He’s doing well. It will be a matter of time before he’s back out here. There’s no timeline, but everything was very positive.”

Additionally, Ian Rapoport claims that Robinson could potentially return at some point in the 2022 season. After having a successful surgery, the Commanders’ rookie running back just has to go through the healing process. This is great news for Brian Robinson, as he dodged any serious injury from the scary incident that took place on Sunday.

From NFL Now: #Commanders RB Brian Robinson is doing as well as possible after an extremely scary Sunday night. pic.twitter.com/FtJVAWlXD0

For now, his timetable to return is completely up in the air. Washington likely won’t know any more information until Robinson gets some rest. The Commanders are not likely to rush him back either, as he is a rookie with his entire career ahead of him. Hopefully, this injury doesn’t hinder Brian Robinson, as rumors were indicating he was going to take over the starting role.

Keep an eye on Robinson, as more information will come to light in the coming weeks.