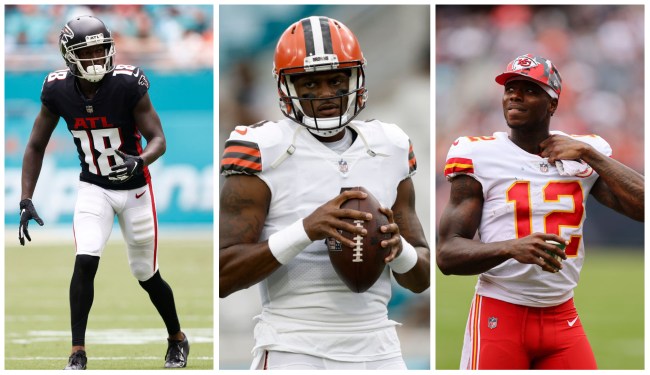 As pointed out by NFL reporter Dov Kleiman, Watson’s 11-game ban looks even stranger when compared to other high-profile punishments in recent years, such as suspensions that the likes of Calvin Ridley, Vontaze Burfict, and Deandre Hopkins have received.

In a Twitter thread, Kleiman compared and contrasted some recent NFL suspensions just to give further context to Watson’s 11-game stint on the sidelines. Among the suspensions listed were:

-Atlanta Falcon wide receiver Calvin Ridley, who was handed an indefinite suspension for betting on the Falcons to win

-The infamous 76 games that Josh Gordon has been suspended for due to substance abuse issues.

The highlighting of other recent high-profile NFL suspensions serves as another reminder of how bizarre Watson’s punishment is given the scope of his alleged misconduct.

As pointed out in an article on the NFL’s official website, not only did 24 separate women sue Watson for sexual misconduct but “Judge Sue L. Robinson found that the NFL had proven according to its own definition that he committed sexual assault against the four women whose cases were presented to her, and Commissioner Roger Goodell called Watson’s alleged behavior ‘predatory.'”

The Deshaun Watson-less Cleveland Browns will open their 2022 season against Baker Mayfield and the Carolina Panthers with journeyman Jacoby Brissett under center. Barring injury, Brissett will likely remain the team’s starter until Watson returns following his 11-game ban.