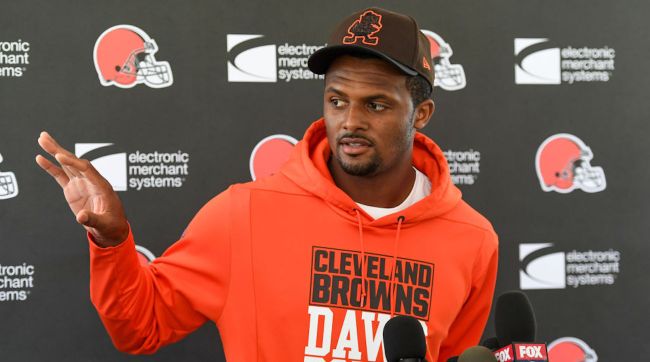 Even the NFL’s own website isn’t all that thrilled with the extent of Deshaun Watson’s punishment, which was confirmed to be an 11-game suspension and a $5 million fine.

According to Battista, the fact that “there were 24 women who filed lawsuits accusing Watson of sexual misconduct, Judge Sue L. Robinson found that the NFL had proven according to its own definition that he committed sexual assault against the four women whose cases were presented to her, and Commissioner Roger Goodell called Watson’s alleged behavior ‘predatory’ last week” means that Watson’s punishment should’ve been more severe.

The fact that the NFL is allowing their own website to publish op-eds that lambast the decision and further drag down Watson — a former star player in the league — goes to show just how badly the 26-year-old quarterback has not only damaged his reputation but his relationship with his employers.

Following the announcement of the decision, Watson — seemingly hellbent on saying all the wrong things, like calling people who were upset about the situation “triggered” — said he’s “looking forward to moving forward” with his career.

That sentiment, however, ignores the fact that writers like Battista and fans like the ones in Jacksonville, who chanted “You sick f**k!” at him just a week ago, aren’t prepared to let Watson’s alleged misconduct go.

While Watson may want to believe that his settlement with the league will allow him to move on to the next chapter of his career, in all likelihood, he’s going to spend the rest of his playing days getting booed and heckled, certainly while he’s on the road.