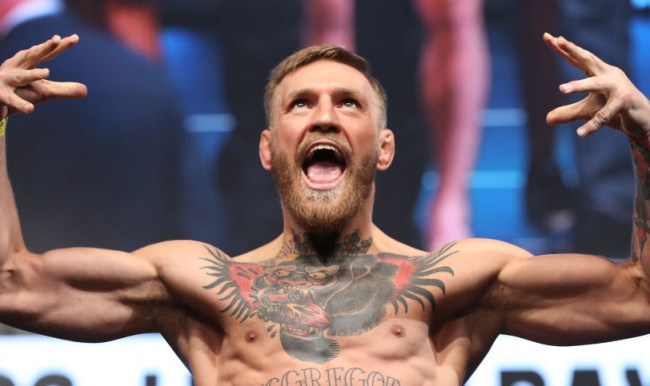 Honestly, I don’t even know where to begin here. The fallout from Conor McGregor and crew’s criminal actions at the Barclays Center on Thursday afternoon is immense.

We’ve already heard from Khabib Nurmagomedov, one of the main targets of McGregor’s wrath, and we know that UFC fighter Ray Borg withdrew from his fight at UFC 223 after shattered glass got into his eye.

yoooooo… first time seeing this one. Conor has legit lost his mind. pic.twitter.com/XcLFd2FIMo

So here’s what has transpired in the hours since. It’s a lot to unpack.

JUST IN: #UFC star Conor McGregor walked out of police station in #NewYorkCity after backstage melee he allegedly instigated pic.twitter.com/h8MUGhJDKr

Artem Lobov, a McGregor teammate and one of those involved in the fracas, was pulled from his fight with Alex Caceres at UFC 223.

The Michael Chiesa vs. Anthony Pettis fight at UFC 223 has also been canceled thanks to the multiple cuts Chiesa suffered during the McGregor attack.

A decision was made by the New York State Athletic Commission to pull me from UFC 223. I’m devastated to say the least. @Showtimepettis I hope to run this match up ASAP, June 9th in your backyard. That’s all I have to say for now. Much love.

During today’s media event at Barclays Center to promote UFC 223: Khabib vs. Holloway, Conor McGregor and Artem Lobov entered the building accompanied by over a dozen individuals.

The group, which included McGregor and Lobov, vandalized the vehicle that contained a number of athletes competing at the event taking place this weekend. NYPD was immediately alerted and is currently in the process of investigating the situation. UFC is working very closely with the New York Athletic Commission, Barclays Center security and law enforcement authorities. All parties are working together to ensure the highest standard of proper safety precautions are implemented to protect the fans and athletes.

The organization deems today’s disruption completely unacceptable and is currently working on the consequences that will follow. Immediately, Lobov has been removed from this weekend’s card and individuals involved in the incident are not welcome at tomorrow’s ceremonial weigh-in or Saturday’s event at Barclays Center.

The incident that occurred today at the Barclay’s Center was unacceptable and has no place in New York State sports.

Multiple published reports, including photos and video, evidently show Mr. McGregor and members of his entourage engaged in destructive, abhorrent and illegal behavior and endangered the safety of those around them. It is our understanding that local law enforcement is involved and is actively responding to the matter.

At least one fighter scheduled to fight on Saturday was purportedly injured in the incident. Medical staff will assess any injured fighters to determine whether they are fit to compete as scheduled.

The Commission has commenced a dialogue with the UFC and Barclay’s Center management in response to the incident. All parties are working together to ensure that appropriate protocols are in place for the protection of the fighters and the fans at UFC 223 and at tomorrow’s weigh-in. The Commission is also conferring with the associated security staffs to ensure that heightened safeguards are implemented prior to the weigh-in and the event.

Mr. McGregor is not licensed by the New York State Athletic Commission.

UFC President Dana White appeared on the First Things First show and revealed that he had been in contact with McGregor.

“We didn’t have a good conversation yesterday, and it wasn’t really about the situation,: said White. “He felt that my interview on ESPN yesterday – and with MMA Junkie – he wasn’t happy with some of the things that I said.”

White also revealed that McGregor did say he felt bad about how his actions affected Rose Namajunas and Michael Chiesa.

"Conor and I talked through text yesterday. Obviously the worst conversation we've ever had. But we talked yesterday before he turned himself in." — @DanaWhite pic.twitter.com/xz1QjB299u

"When Conor found out, he loaded up the plane full of guys from Ireland, flew over here & coordinated this attack."@DanaWhite explains what lead to the McGregor incident at Barclays pic.twitter.com/7OcYsI1C1B

"It's not that I don't think [McGregor] understood what happened, but he justified it. It was justified to him." — @DanaWhite pic.twitter.com/Yu2jv0HvkU

"This is completely irrational behavior. You're a professional athlete. You make millions of dollars a year & you're one of the biggest superstars on planet earth." pic.twitter.com/13KU0b4oko

Numerous fighters have shared their reactions to McGregor’s actions at the Barlcays Center, none of them good, except for of course, Nate Diaz who in a complete turnaround went after Nurmagomedov more than McGregor…

He shouldn't have been trying to punk his boy when he was alone, like a bully. Then he expects not to get rolled on fukn rookie..
And then stay on the bus
haha u guys got punked ….

Time to @ufc start promete good people, fighters that can be a example for kids and new generation and also that can be good for the image of the show.

Having a lot of money and fame can make people change quickly and do weird stuff I think… pic.twitter.com/ZeK9TTARlf

Dana hit the nail on the head what kind of example is this to any kid, especially with a country that is now so invested in the sport. What a disgrace https://t.co/OVnnnsBDaA

For someone talking about how much money he wants to fight again, showing up and trying to scrap for free seems like a poor business move. Especially if your license is revoked in the process… or is that a part of the plan? 😏😉

Just wait till I show up to NYC in the morning. I WISH a mfer would throw some shit my way @TheNotoriousMMA #UFC223

Put Me Back In Coach, WTF?! I Hate Sitting On The Sidelines, Especially W/ All The Bullshit McNuggets & Crew Trying To Pull @barclayscenter The @ufc & Fans Need Me!!! #TonyFergusonMMA SnapJitsu™️ #SnapDownCity -Champ 👊🤨 🇺🇸🏆🇲🇽

Lol of course he's on drugs!! McGregor so coked out of his mind he probably don't even know where he is right now https://t.co/0aYRlrKU3D

I can’t believe Conor "Notorious" McGregor would be his peers lives in jeopardy without even thinking twice about it. Shame on him. https://t.co/iNdogyiimq

@TheNotoriousMMA is a piece of shit.