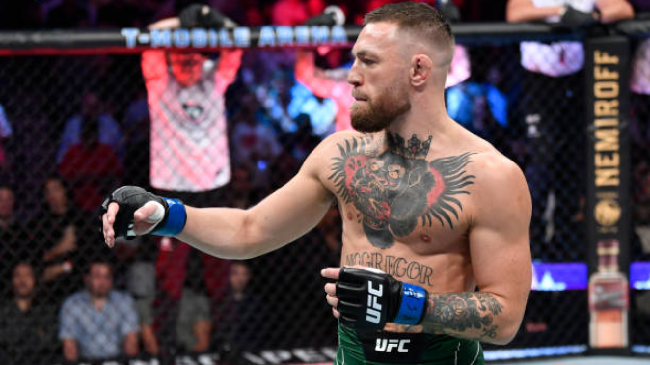 Maybe Conor McGregor isn’t done with the UFC after all.

Last month, McGregor posted a tweet that led some to believe that he may be ready to bring his UFC career to an end.

Now it appears that McGregor is changing his tune on his future. It seems that much like the rest of the MMA world, Conor had his eyes on what was going on in the aftermath of yesterday’s UFC 279 weigh-ins.

This morning, McGregor posted his thoughts on the events, congratulating Nate Diaz on finishing out his UFC contract, but also made sure to add that their trilogy fight will happen.

Congrats Nate Diaz on making it to the end of his contractual obligations with the UFC, and as a bonafide superstar goer. An incredible feat. Fair play.
Our trilogy will happen.

Diaz and McGregor have taken part in two of the biggest fights in UFC history together. The first fight saw Diaz shock the sports world, coming to back to win by rear-naked choke in round 2 after being dominated in round 1.

The second fight was a back and forth war between the two, which once again saw Conor dominate early and Nate work his way back into the fight, but Conor got a second wind late in that fight and took a close decision.

Unfortunately for UFC fans, it seems unlikely at this point that a 3rd fight will ever actually happen. Tonight’s fight against Tony Ferguson is the last on his UFC contract and it seems like he’s ready to move on to other opportunities.

Maybe after exploring those opportunities Diaz will be ready to return to the UFC for one more big payday, but for now, it doesn’t look like him and McGregor are destined to meet for a 3rd time.