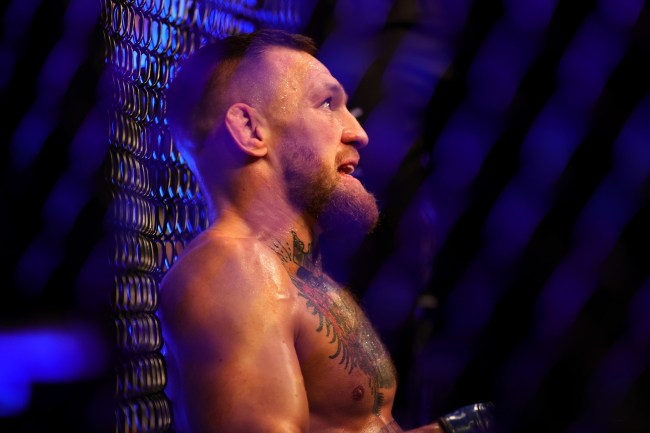 It was only a matter of time. We all knew at some point Conor McGregor was going to have something to say about Dustin Poirier’s loss. It took him less than an hour.

His comments actually came in response to a Nate Diaz tweet where he wondered how Conor had lost to Poirier twice. Conor did not take too kindly to the tweet.

😂😂 you lanky string of piss he got lumped around and got lucky twice. That’s it. Is what it is. Embarrassing night for him alright. That closed guard game. Wtf was that. Wow! Shocking. All good happy Sat night horse yupya it’s proper twelve day tomorrow 12/12. New Paddy’s Day!

Hella times ahhahahaa it’s hella times in the black forge inn tomorrow for proper twelve day bro. Full of it. Sauce Money. Power. Runner up champ yous two are 😂😂 at least yous can say you made championship weight before on the scales at least 😂😂that’s something hahaha pic.twitter.com/Tlb1DBlB6F

These tweets are kind of hilarious, but not because Conor said anything inherently funny. Instead, it’s because Conor McGregor just mocked somebody else’s guard. Did he forget what his fight against Khabib Nurmagomedov looked like? Poirier couldn’t have hit him that hard. Right?

Calling Poirier lucky also gave me a good chuckle. Conor was flat out outclassed in both of their fights this year. He has nothing to offer Dustin Poirier at this stage in their careers.

Also, both of these “runner up champs” have finished Conor McGregor.

Hopefully this is leading to one of two things. If we ever see Conor fight in the UFC again instead of trying to fight Machine Gun Kelly, it should come against Dustin Poirier or Nate Diaz.

Those are the only fights left that make any sense with Conor so far from actually contending for a title.