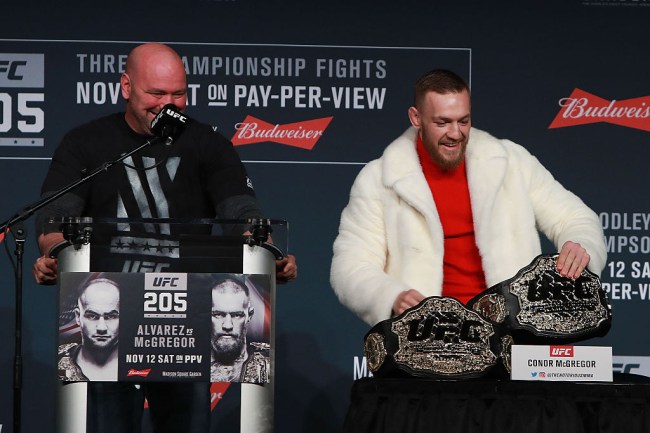 Over the weekend, Khabib Nurmagomedov will fight Max Holloway in what Dana White is calling a UFC lightweight title fight in the main event of UFC 223 on Saturday in Brooklyn despite the fact that Conor McGregor is still the division’s champion.

Yesterday at the UFC 223 press conference, White made it known that McGregor was going to be stripped of the belt because of inactivity even though he reassured everyone that the Irishman was indeed going to return to the Octagon some time this year.

There’s no stripping. We’re not stripping Tony Ferguson. Tony Ferguson isn’t being stripped. The only person here who is losing a belt is Conor. Conor’s losing the belt, these two are fighting for the belt.

“The interim belt that he had, those two [Nurmagomedov and Ferguson] were supposed to fight — doesn’t happen. One of these guys will be the champion,” said White referring to Nurmagomedov and Holloway. “Tony is still the No. 1 contender.”

McGregor — who will no longer be lightweight champion after UFC 223 according to White — is expected to be back before the end of this year.

“Conor is coming back this year 100 percent. He will fight this year. We’ll see how this thing plays out and we’ll go from there,” stated White.

Late last night Conor took to Twitter to respond to White stripping him of the belt and it’s pretty NSFW.

You’s’ll strip me of nothing you’s do nothing cunts.