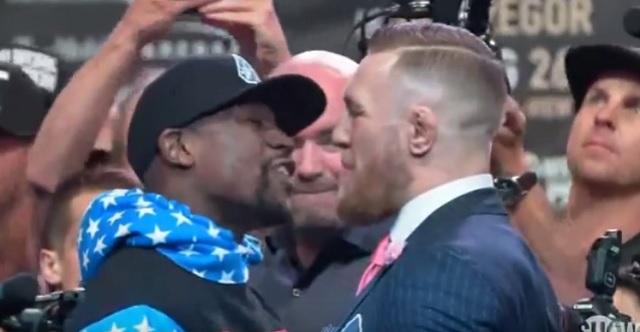 Conor McGregor and Floyd Mayweather finally were able to meet face-to-face in the first stop of their four day press tour. Below are several highlights of the insane presser which featured both fighters talking a massive amount of shit.

It all started with Conor McGregor talking trash at Mayweather during the initial staredown.

Once McGregor was given the floor to speak he quickly went on to mock Mayweather’s recently reported tax troubles.

He’s in a fucking track suit, he can’t even afford a suit anymore

Conor went on to assert that he was going to knock out Mayweather unconscious in four rounds or less.

Conor McGregor "Floyd Mayweather will be unconscious in less than 4 rounds" pic.twitter.com/pwxIfF7agB

Conor was definitely te better of the two trash talkers today but Mayweather did have his moments.

Here is Mayweather getting into a heated exchange with Conor.

To end the show, Conor and Floyd both talked trash to each other’s face for a good minute and a half non-stop.

Can’t wait to do all it again tomorrow.