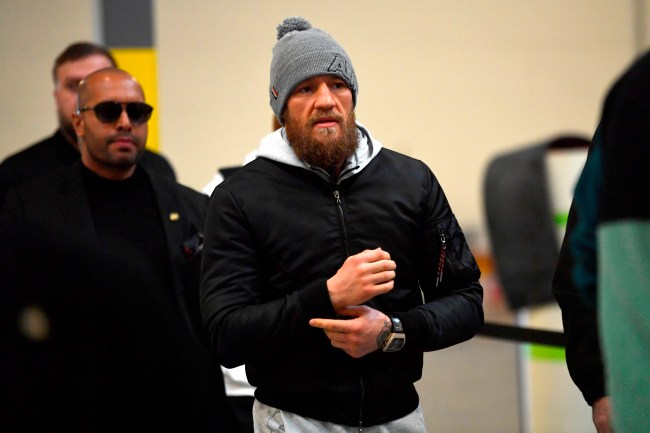 Conor McGregor looks like he’s built for a permanent stay in the welterweight division.

McGregor, who is currently fighting Donald Cerrone at welterweight at UFC 246, is also eyeing a fight against Jorge Masvidal for the ‘BMF’ title in the same division.

“I would like that bad motherfucker title, that belt, then I’d like the gold. For me, the gold has a bit more significance to it, especially since the way the ‘BMF’ fight finished. I thought we were robbed of aa classic contest there. I thought it was only kicking into gear rounds 4 and 5. But they’re both exciting bouts.

“I’d say probably the more exciting of the bouts would probably be myself versus Jorge, from a stylistic standpoint. Usman kind of has the similar style of Khabib [Nurmagomedov], the sniff-the-jockstrap style.”

Conor weighed in at exactly 170 pounds before his UFC 246 fight with Cerrone and he looks absolutely jacked.

Conor McGregor has bulked up massively as he weighs in at his career heaviest pic.twitter.com/HIj43NMFJ6

Compare McGregor now to that time when he fought at 145 pounds.

Still incredible that once upon a time Conor McGregor made 145lbs. The picture on the left is of him hitting the scales for the Jose Aldo fight. The one on the right is from today's #UFC246 official weigh-in where he hit 170lbs. pic.twitter.com/pwu4O3LQOU

Make sure you’re caught up with everything UFC 246 with out fight week previews below.

How Conor McGregor Physically Transformed His Body To Welterweight For UFC 246 https://t.co/4cD8D0nFlO

What’s at stake for @thenotoriousmma? Why is he fighting at UFC 246?

…and we're not talking about the purse.

5 Signs That Conor McGregor Is Really Back And Ready To Rumble At UFC 246 https://t.co/KYkyTIHC24