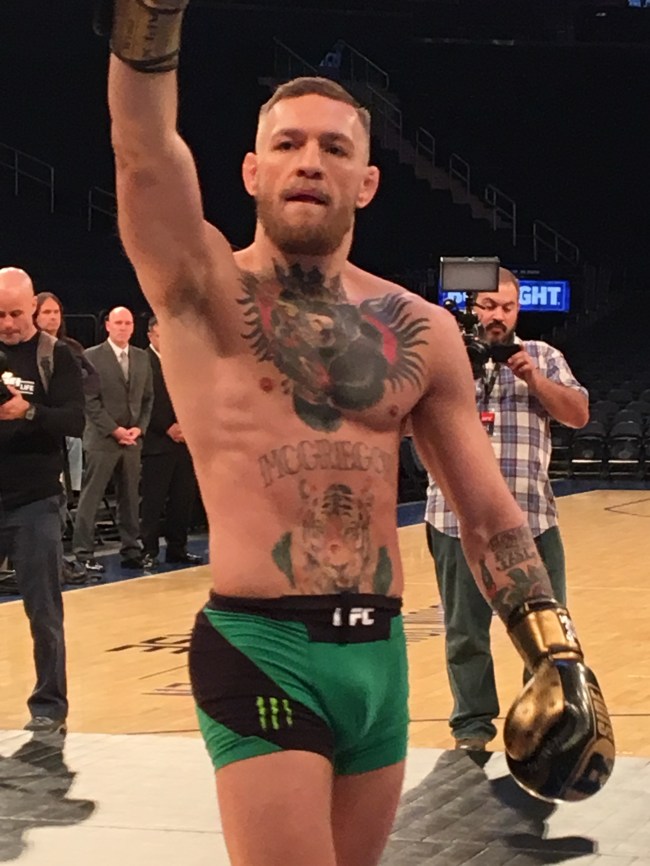 Conor McGregor, “The Notorious” Conor McGregor, is back in the news today, and for the first time in months, it’s for all the right reasons. Earlier this morning, while at a press conference in Moscow, McGregor announced his plans for a huge comeback in 2020, beginning with a fight on January 18 at the T-Mobile Arena in Las Vegas.

It’s refreshing to hear McGregor talk about mixed martial arts fighting, the very thing that propelled him to international stardom. But after a year of pushing his Proper 12 Whiskey all around the world and finding himself in the middle of one controversy after the next, is it fair to take McGregor’s words at face value? There has been no official announcement from the UFC regarding the comeback fight, but MMA fans are waiting with bated breath because if Conor McGregor can return to the form that made him famous and make good on this “Mystic Mac” prophecy, he may very well complete the most impressive, and financially lucrative, run of fights in UFC history.

The war is not over between @TheNotoriousMMA and Khabib. pic.twitter.com/pWIy8grdYi

With no opponent attached to today’s announcement, many have speculated that lightweights Justin Gaethje and Donald “Cowboy” Cerrone are the frontrunners to welcome McGregor back to the Octagon in January. Both would be suitable foes, and both have been previously linked to “The Notorious,” but for all intents and purposes, Cerrone appears to be the better option of the two, not only because he’s the bigger name and the holder of numerous UFC records, but also because, from a stylistic perspective, he’s the more beatable opponent for McGregor.

And, in order for McGregor to make good on this comeback campaign, he needs to win, impressively.

Next up for McGregor in 2020 would be the winner of the UFC 244 main event between Jorge Masvidal and Nate Diaz, a bout that “The Notorious” proposes be a fight for the UFC’s BMF (Baddest Motherfucker) Title.

Now, while UFC president Dana White has already announced that the BMF title will be a one-and-done affair, it’s hard to deny that a McGregor-Diaz trilogy bout or a McGregor-Masvidal main event wouldn’t be worthy of the BMF moniker. It would be.

Conor McGregor announces his comeback fight will be Jan. 18 at T-Mobile Arena in Las Vegas.

Donald Cerrone is the front-runner to be his opponent, per @arielhelwani. pic.twitter.com/veplMrKwub

Between Diaz and Masvidal, it’s impossible to ignore that MMA fans have been clamoring for a McGregor vs. Diaz III for three years. Their previous two fights are two of the three highest selling PPV cards in UFC history, and a third, especially for the BMF title would do big, big business. Of course, if Masvidal beats Diaz on November 2 at Madison Square Garden, his popularity will skyrocket to a level that an ensuing fight versus McGregor would still be a major seller.

With McGregor currently out of action for more than a year (he has only fought once inside the Octagon since November 2016), those two bouts alone would be a major boon for mixed martial arts, a sport where “The Notorious” remains the biggest name in the game, but the third fight in this mystic prophecy could very well be the biggest fight in the history of MMA. However, that sort of depends on if Khabib Nurmagomedov can get past Tony Ferguson in another highly anticipated fight that has yet to be announced.

Calling for the winner of Khabib vs. Ferguson for a fight in Moscow, McGregor has his sights fully set on a rematch with Nurmagomedov, who took their previous bout via fourth round submission. That fight, at UFC 229, remains the highest selling Pay Per View in the history of the UFC and mixed martial arts, and it’s hard to believe that a rematch wouldn’t do even bigger numbers, especially after Khabib jumped out of the Octagon following the bout, inciting a riot inside the T-Mobile Arena.

That’d certainly make him a lock for 2020 Comeback Fighter of the Year.

Thinking a trio of fights with Cerrone, Diaz, and Khabib would also go down as the highest selling and largest grossing year for any fighter in UFC history.

For a guy who hasn’t fought in a year, McGregor has managed to keep his name in the news throughout 2019, but predominantly for all the wrong reasons. However, this fight announcement could very well be the beginning of Conor McGregor’s second life as a UFC fighter, signaling the return of “The Notorious.” And while it’s fair to be skeptical of any fight announcement until it becomes official, McGregor’s proposed 2020 campaign is perhaps too juicy to resist. And should he fulfill this prophecy, and claim both the UFC BMF and lightweight titles in the process, Conor McGregor will not only be the 2020 Comeback Fighter of the Year, but he will truly be the MMA GOAT.

Stay tuned for more updates on Conor McGregor’s next fight.