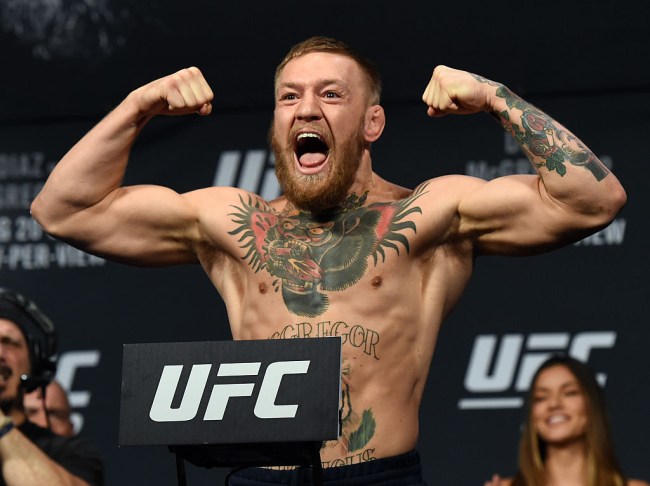 It’s been over a year since Conor McGregor got his shit rocked by Khabib Nurmagomedov at UFC 229 before getting attacked by two of the Russian’s team members after all hell broke loose and he’s been absent from the Octagon since then, opting instead to use his fists to punch an old guy who declined a free sample of his terrible whiskey.

It didn’t take long for the Irishman to challenge his opponent to a rematch but Nurmagomedov has made it very clear that he doesn’t believe McGregor deserves one (a sentiment that was echoed by Joe Rogan).

In March, McGregor claimed he was retiring from fighting before reversing course less than two weeks later much to the surprise of virtually nobody, and since then, there’s been plenty of speculation concerning when he’ll ultimately make his return to MMA—and who he’ll end up fighting.

Last month, Dana White spoke with TMZ and said he was confident that McGregor would mount a comeback at some point early next year to fight either Nate Diaz or Jorge Masvidal, and now, we can finally confirm at least one part of that prediction was correct.

According to ESPN, McGregor spoke at a press conference in Moscow on Thursday and announced he’ll be getting back into the game on January 18th in Las Vegas, and while he said he knows who his opponent is, he declined to reveal his name.

THIS JUST IN — In Moscow this morning, Conor McGregor announces that he'll return to the UFC octagon on January 18th in Las Vegas … in the only way McGregor knows how pic.twitter.com/5EDBRQfZFH

Last week, McGregor agreed to a fight with Frankie Edgar but outlet reports the two names currently being thrown around are Donald Cerrone and Justin Gaethje, with the former being the most likely candidate.

McGregor says he plans to fight at least three times in 2020, and if he manages to hold his own upon returning, you have to imagine a rematch with Nurmagomedov could be in the future.

All I can say is it’s about damn time.