Conor McGregor Wants A Rematch With Khabib But How Many People Would Actually Care About It? 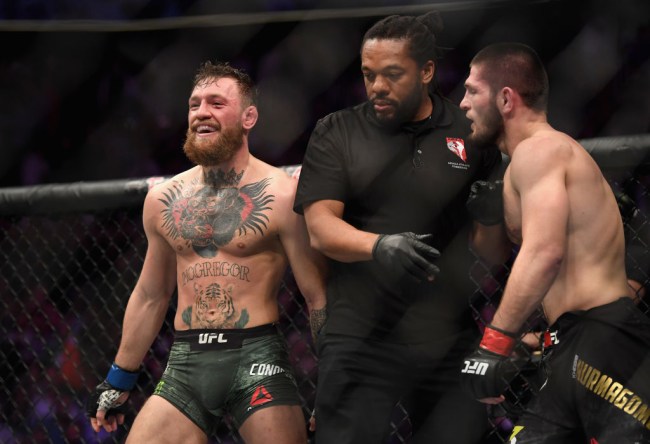 On Saturday, Conor McGregor took an absolute beating at the hands of Khabib Nurmagomedov after the Russian forced the Irishman to tap out during the fourth round of their bout— a victory that was overshadowed by the events that took place after the fight.

To say tensions were high heading into the night would be the ultimate understatement as the two men have a long history stemming back to the infamous Bus Incident that took place earlier this year.

McGregor escalated things with a series of personal attacks aimed at Khabib in the weeks leading up to last weekend’s fight and all hell broke loose after Nurmagomedov jumped over the cage and started throwing blows (although McGregor wasn’t exactly innocent).

Things haven’t really died down since then as the two continue to trade blows online and a pretty delusional McGregor fails to acknowledge he was on the receiving end of an absolute smackdown.

We lost the match but won the battle.
The war goes on. pic.twitter.com/CRtPaGfOnn

Dana White feigned disappointment following the post-match fallout, but as a fan of money, you have to think he was secretly delighted by the events that seem to point toward an inevitable rematch at some point.

According to the UFC head, McGregor immediately reached out to White to let him know he was interested in another matchup.

However, there’s one question that remains unanswered: Do people really want to watch these guys fight again?

Let’s ignore the storyline for a second and look at the facts.

To say Khabib dominated McGregor would be doing a disservice to the word “dominated” as the latter’s standup game was no match for Nurmagomedov takedowns and skills on the mat.

There was barely a single moment in the match where McGregor appeared to have the upper hand and Khabib seemed like he was toying with him throughout the fight.

He even took the time to talk trash while pummeling his opponent.

MMA diehards will obviously tune in (or, more likely, when) a rematch takes place but I’m skeptical that casual fans would be willing to shell out $65 for a fight that will likely be as lopsided as the first unless McGregor manages to magically fix the many issues he ran into.

His coach says McGregor made the mistake of being too defensive and that he’ll have to switch to a more offensive mindset if the two men face off again but Khabib is undefeated for a reason.

I might be setting myself up to be exposed for a retroactive cold take but I’ll cross that bridge when the PPV numbers are revealed.