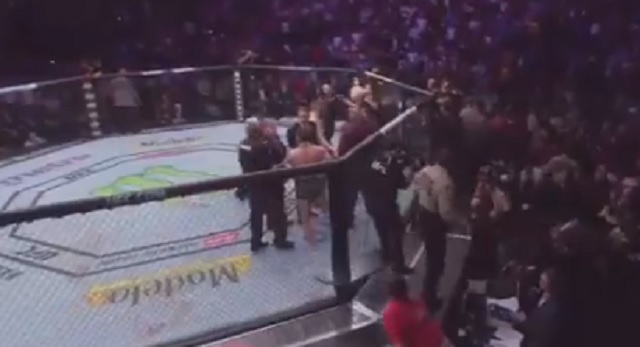 During last night’s UFC 229 brawl, the broadcast team of Jon Anik,Joe Rogan, and Dominick Cruz made it seem like Conor McGregor was an innocent participant after three members of Khabib Nurmagedov’s team jumped into the cage to attack him.

Khabib makes Conor tap out and then chaos ensues

– Khabib talks some extra trash to Conor
– Khabib jumps the cage
– Conor appears to get punched by a member of Khabib's team pic.twitter.com/w2eg4Yz3tc

We now have an alternate angle of what transpired in the cage after Nurmagedov jumped into the crowd and it doesn’t seem like McGregor was blameless in the scuffle.

Several people believe that this was an “unprovoked sucker punch” by Conor.

I am told this was the primary reason Conor refused to press charges. He threw and landed the first physical blow in this melee.

I didn’t notice this. You can see Conor and a Khabib cornerman looking to go over the fence. When Conor is held back by a guard he blindsides the cornerman.
Not quite as innocent as he would first seem… he’s NOT defending anyone or himself hitting a guy who’s not looking. https://t.co/zTPeMcU4Ep

Others say McGregor was trying to defend his teammates after Nurmagedov had already jumped in crowd.

Of course he did, he was running for Conor's team, the guy was going to attack Conor's team, Conor was defending his team from Khabib, who started the riot in the first place, therefor blame should remain on Khabib's shoulders

Once khabib went after his guy all was fair.

In the end Conor refused to press charges against anyone on Nurmagedov’s team and is calling for a rematch.

Conor refused to press charges, according to Dana. Three guys who were detained by Metro were released