Joe Rogan Explains Why He Doesn’t Want To See A McGregor Vs. Khabib Rematch 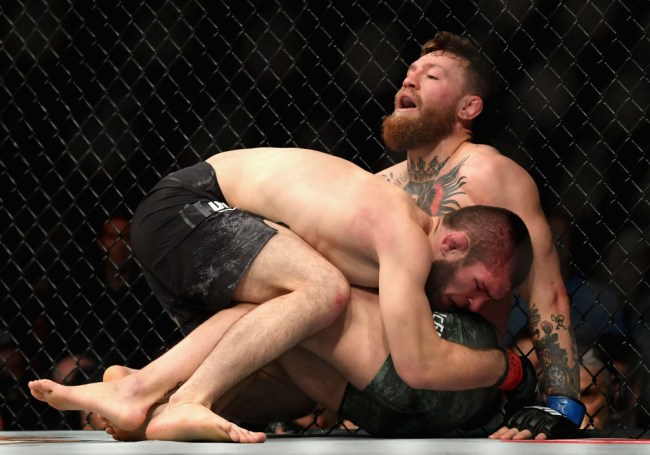 A Conor McGregor/Khabib Nurmagomedov rematch would be a no-brainer from a financial sense. UFC 229 shattered PPV records, with the final tally expected to be just above the 2.4 million mark. For perspective, the fight blew past the previous PPV record for the sport, McGregor’s rematch against Nate Diaz in 2016 that hit 1.6 million. An encore match at a $65 PPV price is guaranteed to be another cash cow for the two fighters.

But, according to UFC color commentator Joe Rogan, a rematch should not even be in the cards yet for one reason: Conor McGregor doesn’t deserve it, despite him thirsting for one.

Rogan said on his podcast, as transcribed by MMA News:

“There’s all this talk about a Conor rematch cause financially that would be a fantastic fight, right?” Rogan said on his podcast on Monday. “Financially. But when you look at what happened, that was a dominant victory. There was one round where Conor did pretty good, the third round. Other than that, Khabib just sort of dominated him.

“Dropped him in the second, beat the f–king s–t out of him in the fourth and the third was the round where Conor did pretty good cause most of was standing up. But it wasn’t like he won it running away. It wasn’t like he blasted him in the body and had him hurt. There was nothing like that. He edged him.”

McGregor’s desire for a rematch is understandable seeing as he managed to secure a majority decision over Nate Diaz in 2016 after Diaz submitted him five months prior.

So who would Rogan want to fight the undefeated Khabib instead of McGregor? Tony Ferguson.

As MMA News points out, Ferguson was the interim lightweight champion before he was stripped of the title due to an injury that impeded him from fighting Nurmagomedov in April.