Conor McGregor Hung Out With And Praised Vladimir Putin At The World Cup, Made People Very Angry 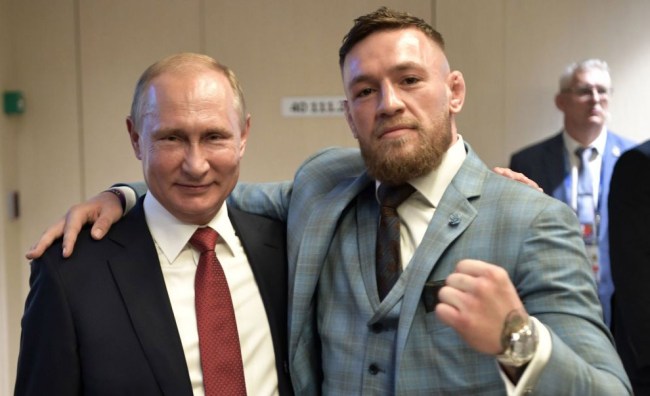 That, however, wasn’t even the weirdest part of the story. The weirdest part was that McGregor, who was celebrating his 30th birthday all weekend, called Putin “one of the greatest leaders of our time” on Instagram, ending his photo caption with a “Go Russia” written in Russian. (Russia wasn’t in the finals, as I mentioned above. Surely he knew that, right?)

“Today I was invited to the World Cup final as a guest of Russian President Vladimir Putin. This man is one of the greatest leaders of our time and I was honored to attend such a landmark event alongside him. Today was an honor for me Mr. Putin. Thank you and congratulations on an amazing World Cup. Россия вперёд!”

Naturally, McGregor’s high praise for the Russian leader made many of his fans angry with him, for obvious reasons.

You may be my favorite fighter of all time but no,man, Putin is not a great leader. Unless you consider leading by fear and murder is considered great. Then yeah I guess he's great at murder.

conor, you know better. disappointing to say the least

When your favorite fighter has disappointed you more than once… pic.twitter.com/hLsVpjOEcd

I was a huge fan but have to unfollow. Putin is pure evil

He’s not a great leader, he’s a murderous thug.

Get your head of your hind parts, Conor. Don’t forget the ppl he’s killed.

This is such wrong statement and you should know it. Don’t be played by a murderer.

Ah FFS man. What are you doing?

Connor McGregor has officially lost it………

And did I mention he was celebrating his 30th birthday all weekend? Because he was…

Annnnd he’s having another kid.

Quite the weekend, huh?