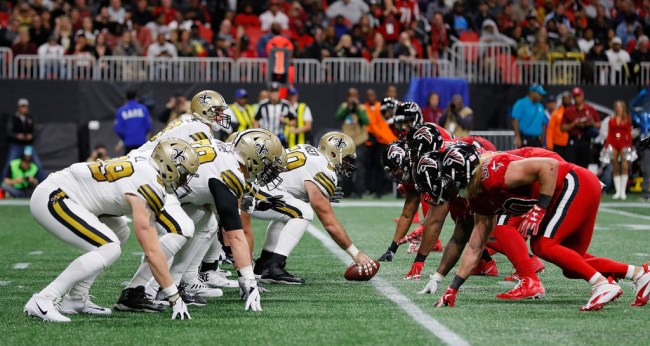 Usually it’s the NBA or Major League Baseball that get accused of rigging things like games to extend playoff series or making sure certain teams get higher draft picks, but this week it’s the NFL that is in conspiracy theorists’ cross-hairs over the Atlanta Falcons vs. New Orleans Saints game that took place last Thursday night.

In the aftermath of New Orleans ironically (in more ways than one) choking away a 17-10 fourth quarter lead, Saints fans, including former New Orleans quarterback Bobby Hebert, began to do what all sports fans have done at one point or another: started looking for conspiracy theories.

Amazingly, in this case, they actually came up with a few things that those partial to wearing tin foil hats definitely have been able to sink their teeth into.

Let’s begin with Hebert. Speaking on WWL AM 870 in New Orleans, the former Saint had this to say about the massive disparity in penalties doled out during the game

“I don’t know if I’ve ever seen a game like this,” Hebert said. “And usually I don’t say, ‘you know ‘the officials they’re cheating’ or calls aren’t going our way. Man, it definitely looked like the fix was on and they wanted the Christmas Eve game (against Atlanta) to mean something. They wanted to keep Atlanta in contention. It was a game of penalties and it was overkill. I understand you’ve got to call some penalties. But just throwing the flag so you become too much of the game? It gets to be ridiculous. Almost you have a three to one penalties (advantage) over Atlanta. You’re going to tell me we were playing that much on the edge where we have 11 penalties, they only have 4? That’s a bunch of bull!”

As WWL pointed out, “The Saints (9-4) were penalized 11 times for 87 yards, nine of which resulted in Falcons’ first downs. That is the most first downs gained via penalty by a team in one game in at least 20 years. The Falcons (8-5) were flagged just four times for 35 yards.”

Hmmm… most first downs gained via penalty by a team in one game in at least 20 years. That seems fishy, no? Well, hang on because we’re just getting started here.

What is this “troubling report?” According to NOLA.com…

The NFL six months ago hired one of the key witnesses who helped inform the league of the alleged New Orleans Saints bounty program.

Mike Cerullo, a defensive assistant with the Saints during 2009, is now working as the director of football administration…

NOLA.com also reports that Cerullo was one of the key whistle-blowers in the the Saints’ bounty scandal — the same scandal that resulted in Payton being suspended for a year.

That’s not all though. We’re still not done yet.

The NFL has confirmed that former Falcons player Phil McKinnely served as the down judge for the Saints-Falcons game. McKinnely spent five years with the Falcons, from 1976 through 1980. He played for the Bears in 1981 and the Rams in 1982.

The strangest aspect of the assignment is that McKinnely isn’t a member of the crew that worked the game. He’s the down judge on Bill Vinovich’s crew, but he was assigned to work on Clete Blakeman’s crew.

PFT also states that McKinnely “was hand-picked (despite five years of playing for the Falcons) to work the Saints-Falcons game.”

Naturally, NFL spokesman Mike Signora denied any impropriety on their part, as one does if you are the NFL.

So was the game rigged in the Falcons’ favor? Maybe. Maybe not. But it’s always fun when the internet speculates.

Meanwhile, in other Atlanta Falcons news…