Saints Coach Sean Payton Appears To Taunt The Falcons With Choke Sign, The Saints Then Immediately Choke Away Game 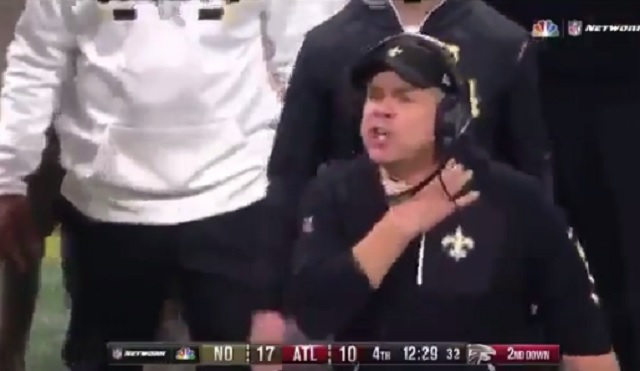 In the fourth quarter, of last night’s Saints-Falcons Thursday Night Football game, Saints head coach Sean Payton appears to taunt Falcons running back Devonta Freeman during a heated back and forth exchange between the two.

In the replay you can see Freeman runs by Payton and the Saints coach says something to him. Freeman turns around and chirps back which leads to Payton to do the choke sign multiple times after Freeman’s run for no gain early in the fourt quarter

Unfortunately for Payton his team choked and gave up 10 fourth quarter points to the Falcons and lost the game after he made his choking gesture on the sidelines..

Now, the NFL isy looking into Payton’s actions on the sideline and may fine him.

The NFL will look into #Saints coach Sean Payton's conduct towards game officials last night, per league source. Could be fined if NFL decides he crossed the line.