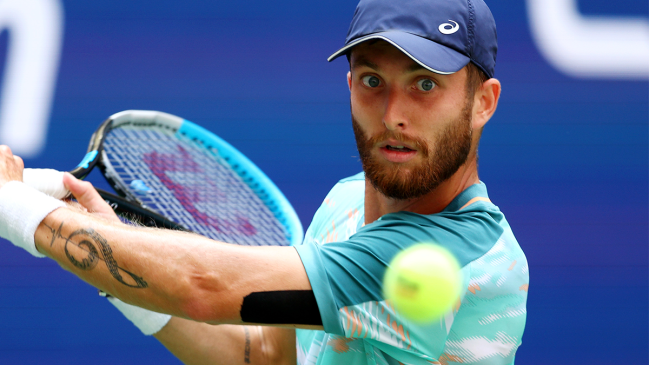 In many ways, a game of tennis is like a chess match; it may involve a bit more athleticism and physical exertion than required to move pieces around a board, but players are typically thinking a few moves ahead in their quest to take home a point.

Of course, tennis players also have the luxury of being able to deploy some sneaky tricks and tactics to swing momentum and change the tide of a match at a moment’s notice—including pulling out the kinds of moves that make everyone who witnesses them channel their inner John Starks and instinctively utter, “Did this dude just did this?”

That’s exactly what happened when Corentin Moutet faced off against Luca Nardi at ATP Naples on Wednesday, as the former pulled out one of the slickest tennis shots you’ll ever see in the first set of his matchup on his Italian opponent’s home turf.

Nardi and Moutet needed sixteen points to settle a first-set tiebreak where Luca eventually walked away with a 9-7 win.  However, the latter was responsible for what was easily the most memorable moment of that back-and-forth.

The two players were tied at six points apiece when Moutet served to kick off a miniature rally that came to an end thanks to the incredibly deceptive move the Frenchman deployed to return Nardi’s desperation lob—one that involved a fake smash that he effortlessly followed up with a delicate drop shot to seal the point.

Corentin Moutet pulling out all the tricks in Naples! 🙌 pic.twitter.com/uUJnQOKzPK

The Italian crowd didn’t seem to appreciate the somewhat unnecessary flashiness of the fake out, but I think most tennis fans without a vested interest in the result of the match—which Moutet ultimately won—would admit it was one hell of a move.