Dallas Cowboys CEO On Dak Prescott And Ezekiel Elliott’s Party: You Won’t ‘Be Seeing That Any More’ 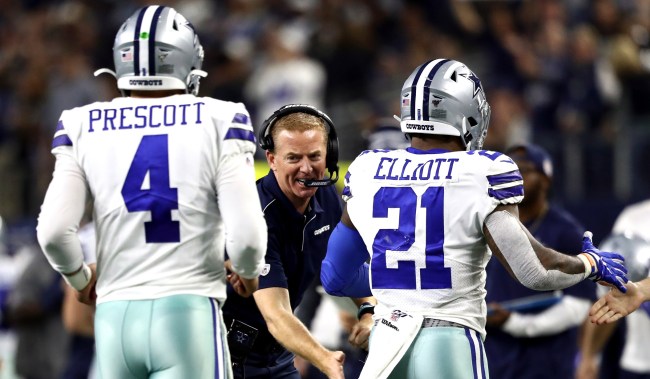 Prescott, along with his teammate Ezekiel Elliott, were among the reported 30 guests at a party held at the quarterback’s home in Prosper, Texas.

A source close to Prescott disputed the report and claimed that he didn’t have over 10 people at his party and did not violate any social distancing guidelines.

On Tuesday, Cowboys CEO Stephen Jones addressed Prescott and Elliott’s involvement in the party with 105.3 The Fan.

Prescott, who is still in negotiations with the Cowboys for a new contract, reportedly won’t be participating in the team’s virtual offseason program without a new deal in place, according to ProFootballTalk.

Not that Stephen Jones claims to have any knowledge of that.

“I’m not necessarily aware of that,” Jones said Tuesday afternoon. “He certainly was sent an iPad, and I know he certainly can participate. For every player, it’s voluntary in terms of their participation in the virtual meetings. I’m not aware and haven’t been made aware of to what degree Dak’s participation level would be.”

"This was one of the most disrespectful things I've seen in a long time."@mspears96 went OFF about hearing reports that police were called to investigate a potential party at Dak Prescott's house. pic.twitter.com/NsEUSQMLVS