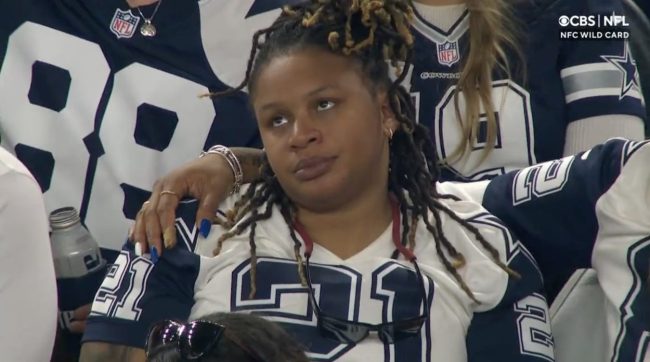 The Dallas Cowboys managed to lose their Wild Card playoff game in the most Cowboys way possible. It was ugly from the get-go, they managed to claw their way back into the game, and then lost in hilarious fashion as the clock ticked down to zero.

It was so perfectly Cowboys. The memes will be glorious.

Among them is this fan wearing an Ezekiel Elliot jersey who was wildly unimpressed with her team’s performance. After Dallas fell behind 23-7 and decided to punt the ball away late in the third quarter, the camera cut to the crowd.

When it found the woman, she gave a look of complete and utter frustration. One of those looks that is like “really? this again?”

Her reaction completely encompassed how all Cowboys fans were feeling at the time. And in a matter of moments, she had gone viral across social media for her expression.

After she exploded across the internet, one of her friends must have let her know. When the camera cut back to her a few moments later, she was looking at her phone and laughing with her friends.

When you find out you became a meme… pic.twitter.com/d7puNzPv4o

For CBS to catch that moment on camera was awesome. They say that you will never forget where you were when you become a meme and that is most certainly the case with unimpressed Cowboys fan.