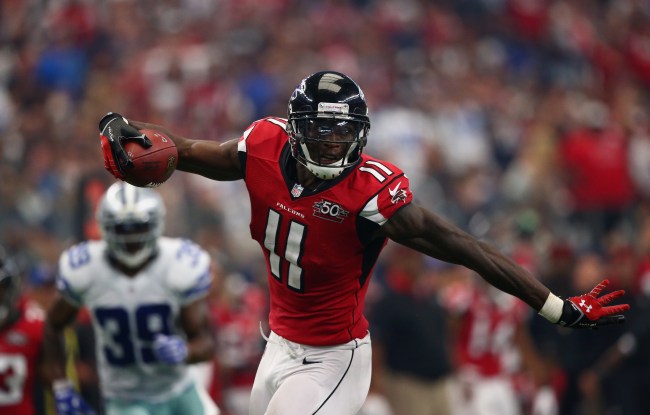 Last week, The Athletic’s Jeff Shultz, reported that the Falcons would like to trade Julio Jones this offseason due to salary cap issues.

Why the Falcons may trade Julio Jones
◽️ Atlanta needs $7 million to $8 million to sign its draft class
◽️ Team feels it needs to choose between Jones or Grady Jarrett
◽️ With such a high price, Jones' market is limited

The Falcons would like to trade Julio Jones. That doesn’t mean it’s 100 percent that it’s going to happen. That doesn’t mean some members of the organization don’t believe the future Hall of Famer can still play, when healthy. But Jones’ availability on the trade market has been clear almost from the time new general manager Terry Fontenot and coach Arthur Smith landed in Atlanta and realized the extent of the team’s salary-cap problems. Anybody who wants to deny that likely is doing so out of mere fandom.

It was later reported that the Patriots had interest in trading for Jones.

The Patriots are considering making a trade for Falcons WR Julio Jones, per @MikeGiardi pic.twitter.com/wabnSQS8FY

Things got really interesting on Saturday afternoon when a fan claims he took a picture with Jones, who was wearing a Dall Cowboys sweatshirt.

Cowboys fans immediately freaked out at the picture of Jones wearing a Cowboys hoodie even though they were unsure when it was taken.

@juliojones_11 please stop teasing us @dallascowboys fans with that hoodie please and thank you😂😂 pic.twitter.com/WtXt64byfY

Why is Julio Jones wearing #Cowboys gear? I don’t want to dig to deep considering we are stacked @ WR and don’t need his contract, but genuinely curious what’s up with that? pic.twitter.com/n1AjoN2UbT

It makes no sense at all and a Julio Jones trade to Dallas won’t happen but man that WR core would be insane 🤯 https://t.co/Y4Ot63SSqM

I'm sure no one will overreact to this

Sooooooooo what the f**k is this lol 👀Julio you ok? pic.twitter.com/QrL3pFbJAN