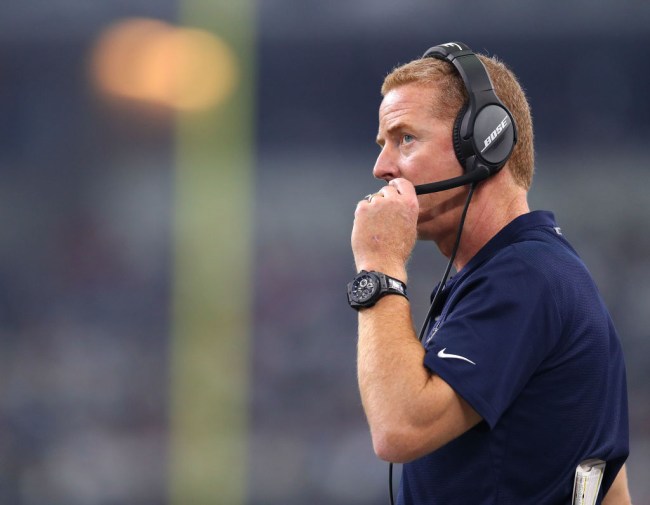 Over the past three seasons, the Cowboys are 18-19 on 4th & 1. That’s a 94.7 percent success rate. The Cowboys offensive line is one of the most expensive in the league. Dak Prescott is physically capable quarterback. The Cowboys have sunk so much money and resources into their run game. The Texans’ ranked 23rd in the league in stopping opponents in 3rd or 4th-and-short situations.

Still, with all these things in play, Cowboys coach Jason Garrett decided to punt the ball on 4th & 1 during the game’s most crucial drive at the Texans 42-yard line (prime just go for it territory). This proved to be a juicy scapegoat call after the Texans drove from their own 10-yard line to kick the game-winning field goal.

After the game, Cowboys owner and certified old person Jerry Jones publicly disagreed with his coach’s decision to play conservatively.

“We were being outplayed. It’s time for risks at that particular time,” Jones said via the team’s website.

Garrett’s defense: it was a long one yard.

“Yeah, it was a long one,” he said after the game. “You know, we had a 3rd-and-2 and we didn’t make much on it and we just felt like at that point in the game, the way our defense was playing, the idea was to pin them down there.”

After the play proved futile for the Cowboys, NFL talking heads and Cowboys fans used Twitter to vent.

Consider that for a moment.

It is painfully obvious after all these years that Jason Garrett is not a championship caliber coach in the NFL. Philly, LAR or New England win this game. He has a .500 mentality. This has gone on too long. https://t.co/VKnmsU3kBa

Punting that ball on fourth-and-1 in plus territory in overtime is the Jason Garrett masterpiece.

With the most expensive offensive line & the RB he drafted No. 4 overall, Jason Garrett punted on 4th & 1 in OT from the opponent's 42.

Next time Garrett says "I don't know what a conservative offense is", someone please give him a hand mirror.

Jason Garrett needs to be fired. Period. What an awful coaching performance. Running on 3rd and 2 when you clearly can't block their front consistently and then punting. He's in over his head.

I bet Jason Garrett waits 30 minutes to swim after eating

Fire Jason Garrett. What a joke.

Jason Garrett should be fired if they lose this game. Awful.

The Cowboys absolutely deserved that for punting on 4th and 1 from the 42-yard line in overtime after spending a bazillion dollars on their OL and drafting a running back at No. 4. Fire Jason Garrett into the sun.

The Cowboys fell to 2-3 behind the Redskins in the NFC East.