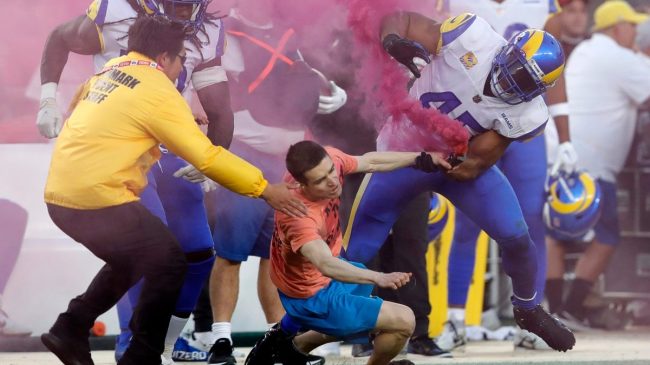 Monday Night Football didn’t quite go the way the Los Angeles Rams had hoped for. Especially considering the top highlight for the team was when Bobby Wagner demolished that crazed fan. However, in a surprising turn of events, it turns out this lunatic that ran on the field is now filing a police report on Wagner.

Yeah, you read that right. According to TMZ, “The fan who was leveled by Bobby Wagner after running onto the field during ‘Monday Night Football’ this week has now filed a police report over the incident.”

This is an absolutely horrible look for this dude. Forget storming the field like a psycho. The guy has the balls to file a police report on Bobby Wagner? With a straight face? In this economy? Hopefully, nothing happens with the Rams star, as all he did was help security take down the random dude running on the field.

It’s not like we’ve never seen a professional athlete step in and stop a streaker or protestor before either. Remember on July 4th when Joey Chestnut tossed that protester to the ground like he was Liam Neeson? Didn’t even lose the lead. Literally snappin’ necks and cashin’ checks like a true American.

Wagner’s job is to defend home turf and that’s exactly what he did tackling that crazed fan. If anything, the Rams star was simply defending his house from an intruder. So, good for this guy for getting his 15 minutes of fame I guess. As for Bobby Wagner, there is no need for you to explain anything. We got your back.

The Fan Apparently Suffered A Concussion From Bobby Wagner’s Hit

According to TMZ, the man indicated in the police report that he “suffered a concussion from the tackle.” The LAPD chimed in and mentions that the deranged fan “had a headache, a concussion without loss of consciousness, and a burn on his inner right bicep.”

The police are investigating where the burn came from, but it is believed it came from the smoke bomb the man was holding while running on the field.