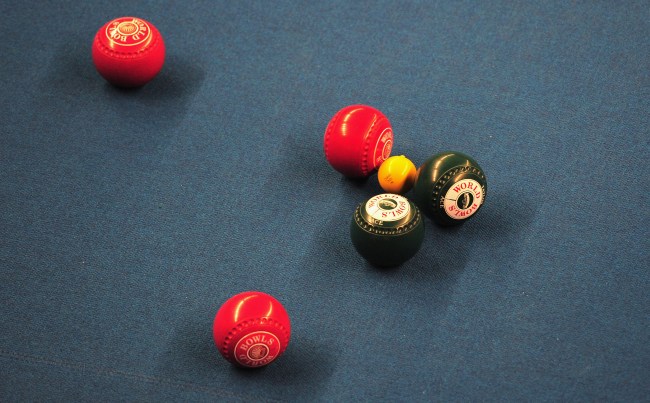 I was cruising through Twitter last night and came across this clip but kept on scrolling. Then I saw it shared again on Digg and then again on Extra Mustard and that’s when I thought that maybe I check out what was happening.

I can’t say that I’ve seen many ‘Indoor Bowls’ clips in my life. From what I can tell, it’s essentially just competitive Bocce Ball that is played inside. But what makes this clip so spectacular is you don’t even have to know what the hell this sport is or what’s happening in order to appreciate how spectacular this shot it.

You could show me a thousand clips of great Cricket plays and I wouldn’t have a clue what was happening (nor care) but this clip immediately draws you in. It’s that good.

The Guardian Sport YouTube channel has shared this clip from the ‘Bowls’ World Indoor Championships and it is England’s Nick Brett who has just ‘six inches’ of a gap to thread his ball perfectly through and execute a masterful shot. I think you see where this is going, yes? Behold bocce ball greatness:

I can’t stop watching. I want to load up the YETI with some Natty Light Seltzer and tailgate the shit out of this event. I’m having trouble understanding why it’s a Winter sport and not a June-September circuit but there’s plenty of time for me to modernize this sport, I don’t need to start overhauling it immediately.

this is me and the fellas this summer playing bocce ball behind the italian restaurant in our neighborhood pic.twitter.com/RX35WTEvgI

I want to buy a jersey, paint my face, and buy front row tickets to this shit

According to Dan Gartland, the balls are actually carved in a way that the tosser/thrower/pitcher can use the lines to guide their trajectory and that’s exactly what we saw here with him perfectly threading that ball into the slot:

After doing some research (including watching a legendary but very uncharismatic carpet bowler instruct some teens on a VHS tape from the 90s) I learned that the balls are designed to curve due to their shape. But still, Brett had to correctly calculate the precise trajectory of the curve that would take it through that tiny sliver of space. I don’t know how he did it. (via)

Here’s an ancient (1980s or 90s) British ‘Masterclass’ video on how to pull of outrageous Bowls shots for anyone out there looking to dive deep into this sport:

If there are college kids playing competitive Quiddich these days then we sure as shit need the NCAA to introduce this as a fully-funded sport.