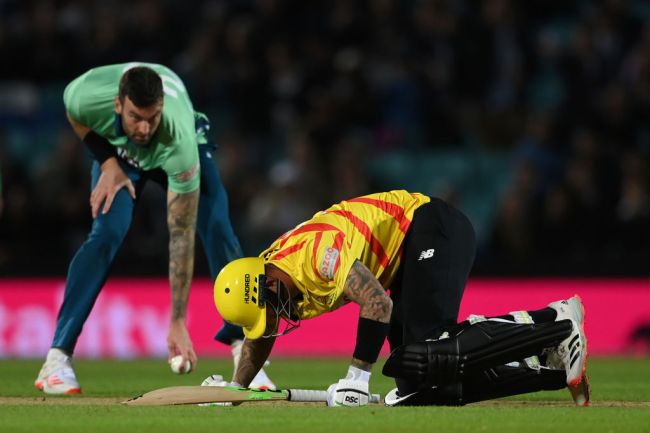 Alex Hales had an incredibly unlucky Sunday. He took a fast ball to the nether regions not once, but twice.

The 32-year-old cricketer and the Trent Rockets faces the Oval Invincibles in a new English cricket competition called The Hundred. How the specific tournament differs from other forms of cricket is not of importance in this situation because the rules do not factor into what happened to Hales.

He stepped up in front of the wickets to face bowler Reece Topley. Before we go any further, let’s take a moment to admire how brilliantly English that the name ‘Reece Topley’ really is.

Anyway, Topley was pitching to Hales and threw the first ball directly at him. In an effort to just make contact, Hales swung through the pitch and essentially fouled it off of himself.

That isn’t the correct cricket term, but that’s what happened. Hales fouled the pitch off and hit himself directly where the sun doesn’t shine.

“That has nailed him in the gooly wooly woolies,” the announcer exclaimed. It is — with no exaggeration — one of the greatest calls in sports history.

After taking a moment to gather himself, Hales got back in the ready position. Topley delivered another ball, this time directly at the wickets.

Hales stepped in front of the wickets and swung again. On the second-straight pitch, the ball ricocheted off of the bat and directly into his gonads. Oof.

After the consecutive unfortunate mishaps, everybody but Hales could only hope to stifle a chuckle. Even umpire Nigel Llong struggled to hide his smirk.

Hales was quick to address the incident on Monday morning and was able to get a bit of a laugh for himself.

Appreciate all the messages of concern after last night.. 🥜 It’s great to know that my well-being was at the forefront of everyone’s thoughts and that no one found it funny in the slightest!Unfortunately it’s worst-case scenario today with minimal swelling and maximal pain 😢

Believe it or not, this was not the first time that lightning struck twice in a cricket match. Australia’s Liam Livingstone and his stones were subjected to the same fate in 2020.