WATCH: Cricket Player Absolutely Hammers A Ball Into The Parking Lot, Obliterates His Own Windshield 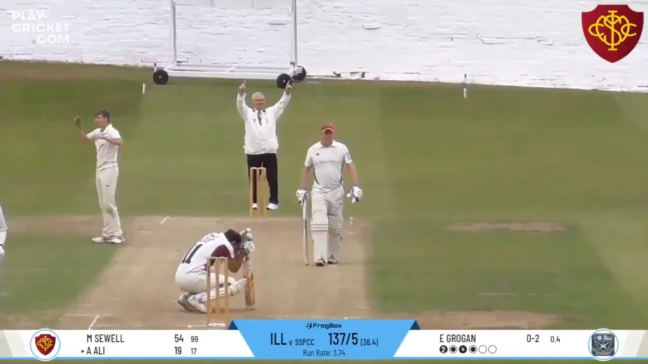 I won’t pretend to know a lot about cricket, but I am confident that Asif Ali hit an absolute moonshot.

A “six” in cricket is the equivalent of a home run. When a batsman hits the ball in the air and it crosses the boundary line before hitting the ground, his team is awarded six runs. It’s one of the biggest joys that a cricketer can experience. That was not the case for Ali.

The Illingworth St. Mary’s walloped a colossal shot over the weekend, only for the ball to go straight through his car window.

🔊 Sound on to hear the smash 💥 pic.twitter.com/FNjRMic9U5

38-year-old Ali was appearing for Illingworth St. Mary’s during a Halifax Cup quarter-final on Sunday and absolutely got ahold of one. He quickly realized that the ball was headed for his own parked car and buries his hands in his knees. Meanwhile, his teammates and those in the crowd could not help but to jeer and giggle. The umpire, unable to stifle a laugh, signals for a six with a wry smile.

The massive shot came as apart of an impressive frame from Ali. He scored a 43 not out, which from what I can tell is a quality outing with the bat.

However, Ali’s performance was not enough. To add insult to injury, Illingworth St. Mary’s lost in the quarterfinal and was eliminated. Not only did Ali have to drive home with a broken windshield, but he did so in defeat. Whether you know anything about cricket or not, that is not the result you’re looking for.