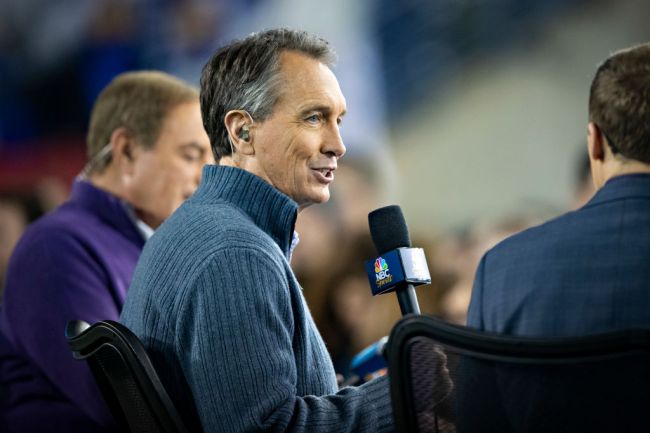 Who is Cris Collinsworth?

The question “The announcers on NBC Sunday Night Football are Al Michaels and this former wide receiver.”

The ladies are stumped.

Cris Collinsworth was a $1,600 clue on last night’s Jeopardy.

No one got it. 🤷‍♂️ pic.twitter.com/Hpy3u6cnzX

Collinsworth took this slight as a (cue sad horn) humbling moment because nobody on Jeopardy “had a clue.”

Another humbling moment. Nobody on Jeopardy had a clue pic.twitter.com/u2k23i5XuB

This will come off sounding sexist, but it’s 1000% a compliment – I don’t expect any of those women to know the answer. They’re all obviously intelligent and well read. They made it on Jeopardy, a show that demands knowledge above and beyond the typical person.

While preparing for the show, it’s doubtful these women even considering brushing up on sports if it’s a category, but even if they did, it’s not like “announcers” would be a focus of study. Past champions and major historical events in the world of sports is probably enough prep.

The contestants have, at most, two seconds to think of an answer and buzz in. They’re probably just not sports fans, or maybe kind of know his name but didn’t want to guess and lose money. Jeopardy is a game of knowledge AND strategy.

Also, if their husbands or boyfriends are anything like me, I typically mute every NFL announcer not named Tony Romo.