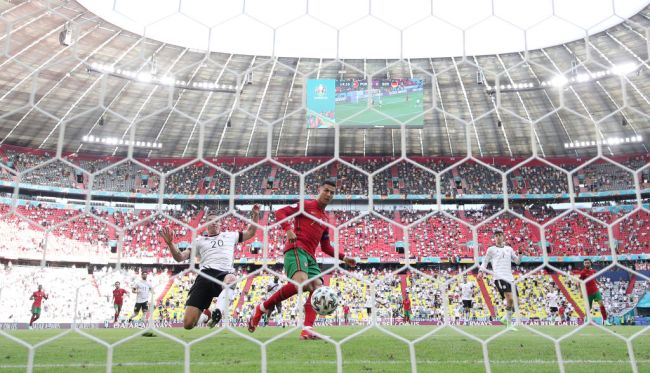 Cristiano Ronaldo is two goals away from tying Ali Daei’s record for the most international goals scored after finding the net on Saturday. The 36-year-old defies age and remains atop the sport.

His incredible legacy only continues to grow and it’s becoming increasingly clear that he is the greatest of all-time. Arguments for other players continue to dwindle as Ronaldo does freakish things in the latter portion of his career.

He was back in form during the second game of the 2020 (in 2021) UEFA European Championship. Although Portugal ended up on the losing side of a 4-2 final score, Ronaldo recorded another first. Yes, 18 years into his storied career, Ronaldo is still doing things for the first time.

In the early seconds of the 15th minute, No. 7 scored his first-ever goal against Germany. He found the ball bounce to him in the box and finished from short distance. Ronaldo was in the right place at the right time and scored past Manuel Neuer.

RONALDO'S FIRST EVER GOAL AGAINST GERMANY 💥

For Ronaldo to get in that position was no fluke. The replay shows him clear the ball from the box on the defense end, before turning on the jets and going the length of the pitch in 15 seconds.

Let’s do the math:

The pitch at Allianz Arena runs about 105 meters. The average goalie box is about 5.5 meters. Thus, Ronaldo covered approximately 95/100 yards in 15 seconds.

The current world record in the 100-meter dash was set by Usain Bolt in 2009 at 9.58 seconds. Ronaldo was five seconds slower and didn’t come from the blocks. He had to land from the clearance, acknowledge the run, reestablish his positions and then took off. The distance covered is insanely fast for anyone, but especially a 36-year-old Ronaldo.

No fear of Neuer.

In addition to his wicked pace, the Portuguese captain accomplished another impressive feat. Neuer, regarded as one of the best keepers in history, made the first save in the sequence but could not get back to block the opening goal from Ronaldo.

Despite never playing in the same club league, it was Ronaldo’s 10th goal on Neuer in just seven games. He now owns the most goals by an individual against the German keeper.

He's the player who has scored most goals against the german. 🐐 pic.twitter.com/aApqySFGlt

Ronaldo is an ageless wonder and his incredible speed on the pitch shows no signs of stopping.