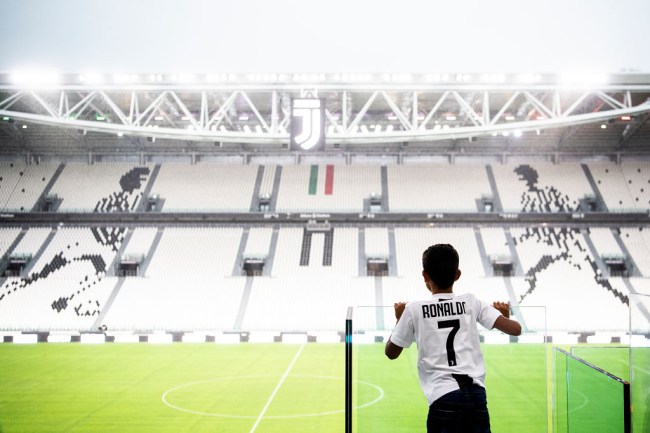 Since joining Juventus from Real Madrid in July of 2018, Cristiano Ronaldo has found the back of the net 34 times. That may seem like a nice number, but not when you compare it to his own son’s tally of 58 goals for in that same time frame for Juventus’ academy team.

That’s correct, nine-year-old Ronaldo Jr. has scored nearly twice as money goals for Juve than his father has. Ronaldo managed just 28 goals last season which was his lowest total for 10 years and his first time not to crack the 30-mark since he was in a Manchester United kit during the 2008-09 season.

Ronaldo’s son joined the academy’s team when he made the move to the Italian club and has tallied nearly 60 goals along with 18 assists in just 28 games. He’s averaging over two goals per game and even managed to score seven goals in just one half against CS Maritimo according to AS.

He is playing for Juventus and adapting really well,” the Portugal international told DAZN. “It has been easier for him than for me.”

“I hope that [he] can be like his dad. He says he is going to be better, but I think it’s difficult.”

It surely will be difficult for Ronaldo’s son to fill any sort of his father’s shoes on the professional level, but he’s certainly off to the right start by absolutely dominating other kids on the pitch.

As someone who played mediocre club soccer and high school soccer in a small town in Tennessee, I can confidently say that 9-year-old Ronaldo would be on junior-high team’s rosters around the United States right now and embarrass a good amount of kids five years older than him.

As you can see in the video, the kid has some tekkers and knows how to put the ball into the back of the net. It’s almost as if he’s grown up watching somebody in his family dominate the game of soccer.