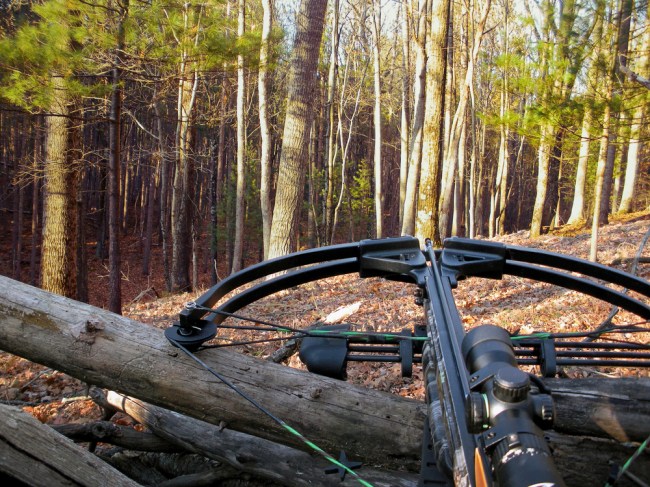 A crossbow hunter from Mississippi has made headlines after bagging 36-point deer with the craziest rack you’ll ever see. This deer is being described as a complete ‘freak of nature’, and for good reason.

Hunter Stan Ethredge bagged this deer with a crossbow while hunting near his home in Philadelphia, Mississippi. He’d seen the buck throughout his property of several hundred acres for the past four years. His wildlife cameras had captured photographs of the remarkable deer and he watched as the deer’s rack grew from 6-points just 3 years ago to the remarkable 36-point rack today. In total, the 36-point rack measured 227⅜ on the buckmasters scoring system with a 16-inch spread.

After seeing photographs of this deer‘s 36-point rack I can’t help but wonder if it was exposed to some of that toxic ooze from Teenage Mutant Ninja Turtles or that radioactive material that created the three-eyed fish in The Simpsons. That’s how other-worldly the rack on this deer looks. This 36-point buck is also believed to have suffered from Bullwinkle Syndrome.

This huge 36-point deer was bagged in Mississippi. It appears to have Bullwinkle Syndrome.https://t.co/jjva7O63bo pic.twitter.com/UppQANms3B

According to USA Today, Stan Ethredge encountered the remarkable buck just once last year during hunting season but he wasn’t able to get a shot off with his crossbow. This year was a different story:

When this hunting season arrived, the buck had become a freak of nature. His antlers had grown into a mass of twisted and turned tines with massive bases. And he was still in velvet. Ethredge was almost able to harvest him right off the bat.
“I saw him opening day and it was right at dark and I didn’t want to mess him up,” Ethredge said. “I just watched him.”
Ethredge said the deer on his place have him patterned better than he has them patterned. In fact, he said that judging by the photos he sees of bucks near his stands while he is away, he’s pretty sure they know his work schedule.
Ethredge would have normally been at work Oct. 20, but he took a vacation day. He figured the schedule change might fool the deer.
“I decided to hunt that evening because the deer thought I was at work,” Ethredge said. “It was about dark and a doe stepped out.
“She walked toward me and he stepped out. He got about 30 yards from me. I was telling my self to keep my composure. My heart was beating out of my chest.” (via USA Today)

Man vs. Beast. A hunt that was 4-years in the making, and one which culminated in a 36-point trophy rack. William McKinley, deer program coordinator for the Mississippi Department of Wildlife, told Ethredge that this wasn’t the deer of a lifetime at all, he told him ‘It’s a deer of several lifetimes.’

For more on this remarkable trophy buck you can CLICK HERE to head on over to USA Today.