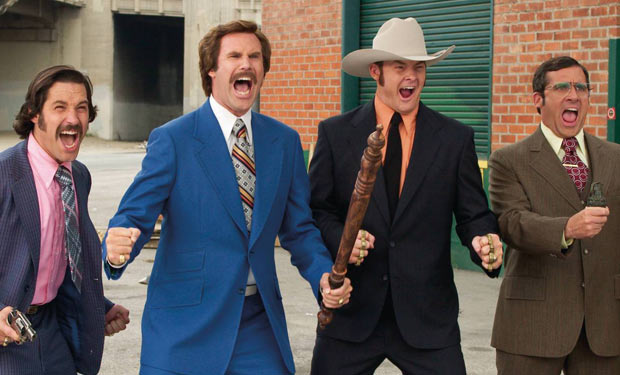 I’ve got a BIG story for you. The Chicago Cubs are not in Milwaukee, so no need to bark twice. But they are on a west coast trip that takes them to San Francisco, L.A., and San Diego (Fun fact: discovered by the Germans in 1904, they named it “San Diego,” which of course in German means “a whale’s vagina.”). During the road trip, Cubs manager Joe Maddon has suggested that his players dress up like 70s news anchors from the movie “Anchorman.”

Where’d you get your clothes… from the… toilet store?

“Joe bounced stuff off of us and we said, ‘Yeah, this one will be cool and fun because we’re going to San Diego and we can wear it there and coming back,'” Jason Heyward said. “I’m sure teams have done it before.”

The Cubs dressed up like characters from Anchorman on their way into the ballpark tonight. 😂 (via @Cubs) pic.twitter.com/vM7Dynaeal

I do trust that none of the Cubs players dressed up as James Westfall or Dr. Kenneth Noisewater.

“We’ll have to contact Will Ferrell,” Anthony Rizzo said. “I saw him a couple weeks ago in Boston. Maybe he’ll come and say hello while we’re in LA.”

The Cubs have departed for their first themed trip of the season.

Hey nice clothes gentlemen, I didn’t know the Salvation Army was having a sale.

Hopefully, Schwarber does his best “Gene Tenace at the plate” impression.

The Cubs wore the retro costumes on Thursday and will don them again when they go to San Diego, where the 2004 comedy takes place.

Some of the players look like they immediately regret this decision.

If only Pablo Sandoval was still on the Giants, a Cubs player dressed as Brian Fantana could call him a “panda jerk.”

All in all, it appears that the themed road trip is a success; the Cubs have a three-game winning streak, there were no horses, no men on fire, and no one was killed with a trident.

What would Ron Burgundy say about the #Cubs homestand? (question courtesy @MikeBermanNBC) pic.twitter.com/yzHL3OJ1f3

Speaking of Ron Burgundy, the man, the myth, the legend, he appeared on ESPN to give a special report on the “Anchorman” tribute by the Cubs.

I guess ESPN fired a few too much on-air talent and had to get Ron in for emergency coverage.