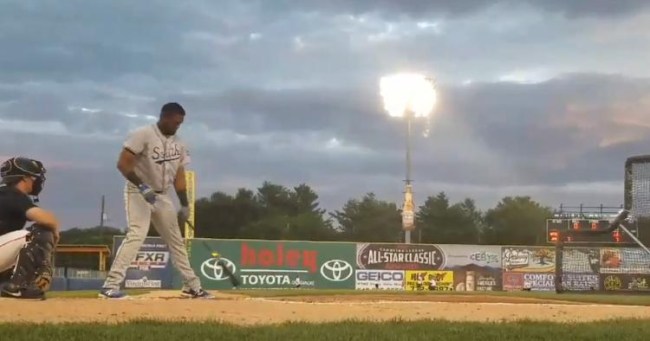 As if the Chicago Cubs didn’t have enough young stars on their current roster to make a splash. Now their minor league players are getting national headlines with their exemplary talents. Eloy Jimenez, who is the Cubs’ top prospect, has plus-plus power and a .546 slugging percentage with the Myrtle Beach Pelicans. The young slugger flaunted his tremendous swing at the Class A Advanced Carolina League’s Home Run Derby on Monday. Jimenez did not disappoint.

Jimenez smashed a baseball into another orbit during the derby and it went so far that it obliterated a set of lights high on a pole past the fence in left field. The blast by the 20-year-old phenom ruptured the lights which sparked comparisons to Roy Hobbs’ triumphant blast in “The Natural.”

Here is the second round Jimenez at the home run derby where he continued to mash.

Despite the Roy Hobbs-esque light-shattering bomb, he did not have enough to beat Milwaukee Brewers prospect Jake Gatewood.

So in the first round of the Midwest League home run derby we got to watch Vladimir Guerrero Jr. hit bombs for three minutes. Early leader. pic.twitter.com/s4iJajuQNV