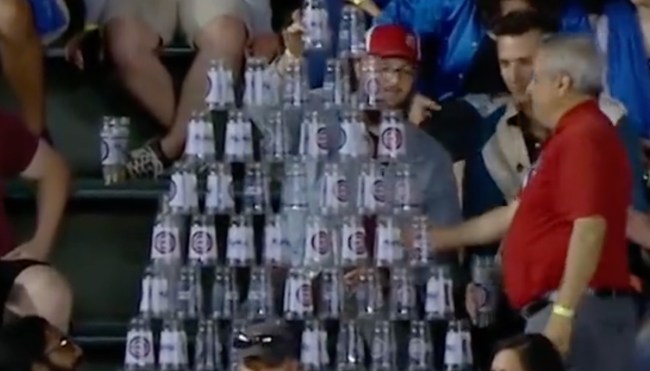 It’s hard to match the unique camaraderie you instantly share with thousands of people you’ve never met when you make the trek to watch one of the teams you root for play on their home turf and find yourself surrounded by a mass of spectators who all share a common cause.

That unspoken collectivism can be manifested in plenty of ways, whether it involves an entire arena breaking out into the same chant or The Wave making its way around a stadium. However, there aren’t many examples I adore more than the phenomenon known as the “beer snake.”

The first documented sighting of the beer snake occurred at a game at Wrigley Field in 1969 when fans started stacking the empty cups that eventually formed a massive chain. The idea caught on at other venues as spectators followed their lead, including the people who donated their empties for the cause that would end up being one of the more memorable highlights of the XFL’s short-lived reboot.

During Thursday’s game between the Cubs and the Cardinals in Chicago, a few bleacher creatures decided to turn to a spiritually similar project to stay occupied by using empty beer cups to build a massive pyramid. By the time the bottom of the sixth rolled around, they’d erected an impressive nine-level structure with the help of the approximately 70 cups that were used in its construction.

Unfortunately, the good times eventually came to an end after the beer cup pyramid caught the attention of an usher who showed zero sign of remorse after walking down the aisle and casually demolishing it.

Never seen someone who hates fun more than this guy pic.twitter.com/d1ILDt1K4d

It’s unclear if the man in question was a fun-hating vigilante or simply following the orders issued by high-ranking members of the Fun Police, but it’s safe to say people were not thrilled with the decision to decimate the pyramid.

Cubs: so our team isn't gonna win
Come to the game and spend $100s on beer
Fans: okay can we have fun?
Cubs: no, you will sit there and throw away each cup after use. NO STACKING OF ANY KIND!
Fans: but…. why?
Cubs: idk, just cause https://t.co/Ch4rbKNHMM

Wrigley ushers enforcing the strict beer cup pyramid building codes (this attendant had a base 15 cups wide, which is a safety violation) pic.twitter.com/NMqJ4AV6Ay

These men are terrorists at Wrigley. Red shirt karate chopped our beer snake at my bach party 2 weeks ago bc it was longer than 8 rows https://t.co/ksRSHr7hAB

Boog and JD making fun of the usher who, on live TV, knocked down a beer cup pyramid in the bleachers is the call of the game.

Nothing gold can stay.