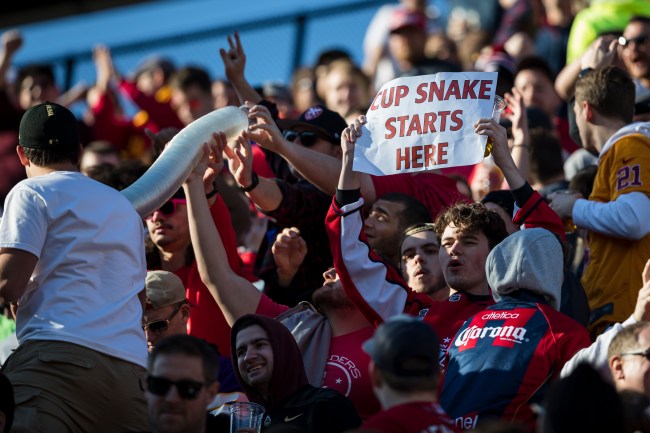 I haven’t been to an XFL 2020 game yet, unfortunately. I was offered the opportunity to go to the Sunday night Tampa Bay Vipers game two weeks ago but had to pass because of scheduling conflicts. I am itching to go, however, because it looks like an incredible fan experience.

One thing I keep hearing about the XFL 2020 is in order for it to succeed they will need to incentivize the fans to keep coming back and transform the diehard fans into ambassadors for the team. You already see this with superfans dressing up like complete assholes in the stands, and I mean that in the best of ways.

I think another way for them to get the fans involved is by letting them take ownership of the fan experience a little bit more than the NFL, and you see that here with this glorious ‘Beer Snake’ at the DC Defenders game versus the STL BattleHawks. DC won that game 15-6 which is a truly outrageous score for a professional football game but we’re dealing with some crazy new rules, right?

Anyway, check out this glorious Beer Snake and tell me this isn’t the sports highlight of the weekend.

WE ARE DEALING WITH AN ALL-TIME BEER SNAKE FOLKS.

THIS IS WHAT LEGENDS ARE MADE OF.

THIS IS THE XFL. pic.twitter.com/UYrDS7ut1I

UPDATE: The beer snake is almost as tall as the uprights. pic.twitter.com/xzPJXLNmw8 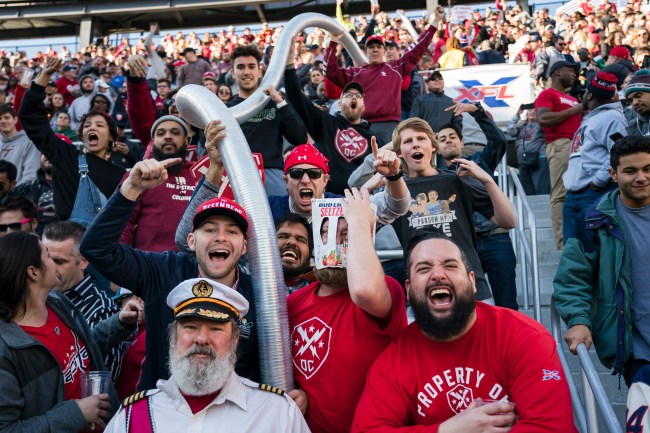 As pointed out on For The Win, XFL commissioner Oliver Luck even contributed a cup of his own to the massive beer snake, something that NFL commissioner Roger Goodell wouldn’t even consider on his best day.

GET YOU A LEAGUE COMMISSIONER WHO CONTRIBUTES A CUP TO THE GIANT BEER SNAKE.

On the XFL side, the Houston Roughnecks are the only undefeated team (5-0) and lead the XFL West. In the XFL East, three teams are 3-2 with the Tampa Bay Vipers bringing up the rear at 1-4. For a rundown of Week 6 action and what’s ahead, you can click here to visit the XFL’s website.