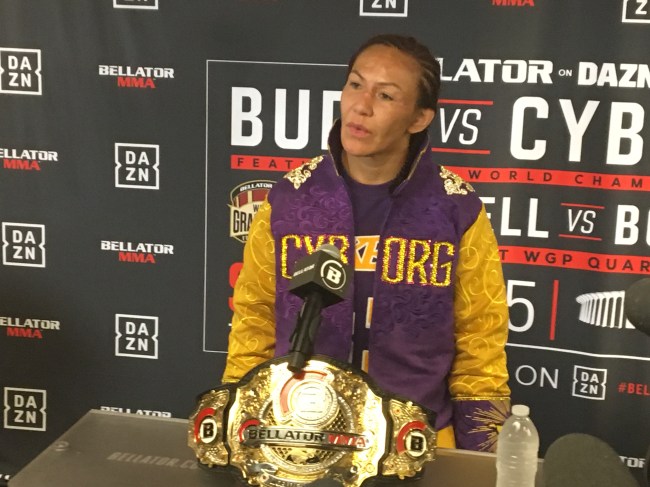 There were no Bellator cage jitters for Cris “Cyborg” Justino.

The multiple time world champion was successful in her Bellator debut, winning the featherweight title with an absolutely dominant performance against Julia Budd.

Having already won world titles in the UFC, Invicta FC, and Strikeforce, “Cyborg” looked as dominant as ever, out-muscling and out-striking Budd. It was a technical and violent performance that ended with a barrage of punches and kicks in the fourth round that sent Budd crumpling to the mat.

Starting slow, “Cyborg” managed her gas tank well, increasing her offensive output with every sequential round.

Budd looked good early on, controlling “Cyborg” against the fence. However, despite landing a few clean shots, Budd was never quite able to put “Cyborg” in any real trouble.

“Cyborg” was clinical in her approach, sweeping the first three rounds. In the fourth, “Cyborg” unloaded on Budd, landing almost everything she threw. And, after connecting on nearly a dozen consecutive strikes, “Cyborg” landed a heavy body punch that dropped Budd. The finish officially came at 1:14 of the fourth round.

And now we know why Darrion Caldwell (@TheWolfMMA) was super edgy leading up to his #Bellator238 win over Adam Borics. pic.twitter.com/r85y5SgVIO

Competing in the quarterfinals of Bellator’s featherweight Grand Prix, Caldwell used his dominant wrestling to control Borics on the ground. And even with an unconventional approach and foot placement, Caldwell was able to slap on the rear naked choke.

The finish came 2:20 of the first round, ending Borics’ previously unbeaten record.

Sergio Pettis, another Bellator debutante and former UFC stalwart, looked sharp in his first performance inside the Bellator cage.

Needing all of three minutes to finish Alfred Kashakyan, Pettis showed crisp striking, dropping his opponent with a clean right hook before swarming in for the finish. First pouring on the ground strikes, Pettis quickly sunk in the guillotine choke. There was no official tapout, as Kashakyan was rendered unconscious from the jiu jitsu technique.