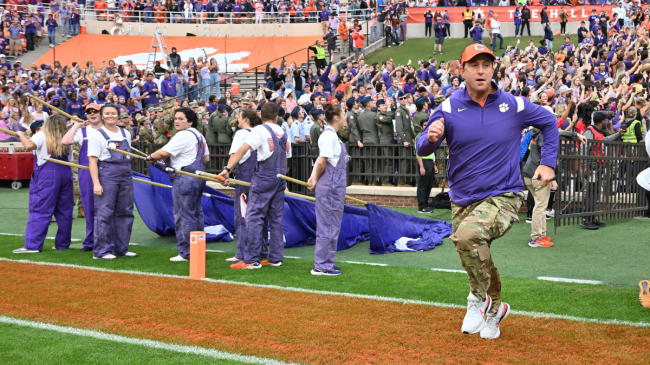 Dabo Swinney is always a hot name when it comes to major job openings in both the college and professional football world. He’s been linked to the Miami Dolphins, suggested as Nick Saban’s replacement at Alabama, and connected to notable college football vacancies throughout the years.

Through it all, he’s remained at Clemson.

And why wouldn’t he? After taking over in an interim role with the Tigers in 2008, Swinney has been able to build an ACC empire in the upstate of South Carolina. He’s turned his program into a perennial contender, putting Clemson under a national spotlight.

The Tigers have won 10 games or more in 11 consecutive seasons. A 12th seems likely with his team currently sitting at 9-1. He’s landed a pair of national titles and a number of conference championships throughout his 15-year tenure.

Through it all, he’s expressed loyalty and happiness to the university that employs him, evidenced by his remaining with the program despite all of these opportunities. But now, another looms.

Reports are circulating that Dabo’s representatives are in contact with Auburn, who recently fired head coach Bryan Harsin. Here’s what the folks at Auburn Daily had to say earlier this week.

According to our sources (also confirmed by a few outlets, we are not the first to mention Swinney and Auburn), Dabo Swinney’s representatives have been having conversations with Auburn University since around last Saturday.

Note that this does not mean the Tigers are going to hire him, nor does it mean they are currently trying to hire him. All that has been said is that his representatives have been in conversations with Auburn.

Many, however, remain unconvinced that he really has interest in the job.

Instead, they believe he’s using the vacancy as an opportunity to make more money.

After these reports began to break on social media, fans started chiming in with their opinion of the situation. Many are skeptical that Dabo would leave Clemson for Auburn.

One person said, “Feels like an ‘I want a new contract’ maneuver.”

Another posted, “Of course, Dabo would be a huge hire. Then again coaches get all giddy when their names are tossed around for openings because they know they’re about to get PAID!”

Others believe it’s just a “smokescreen” to get eyes off of Auburn’s dealings with Lane Kiffin. Kiffin has been reported to be the Tigers’ top target.

Swinney is the second-highest paid coach in college football after signing a massive $115M extension this past offseason. If guess the fans think he wants even more, and he’s using the Auburn opening as leverage.