Fans Are Calling Out Clemson Coach Dabo Swinney After He Signed A Massive, $115 Million Contract Extension 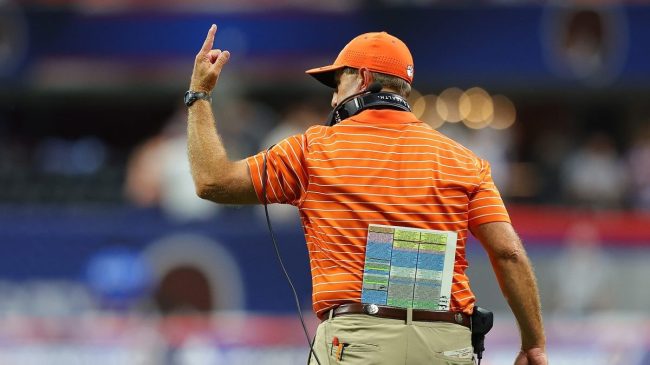 While Clemson fans love Dabo, the rest of the college football world can’t always say the same. Swinney’s aggressive evangelism often rubs people the wrong way. Perhaps it has something to do with his dislike of players’ transfer rights. Or maybe it has to do with Swinney’s aversion to players being properly compensated for their work.

Whatever the reasons, the extremely successful Clemson coach isn’t a fan favorite across the country. Now it appears those same fans have even more reason to lay into the Tigers’ head man.

Swinney accomplishments with the Tigers are undeniable. Though he went “just” 10-4 in 2021, Swinney has led one of college football’s most dominant programs over the last decade.

Clemson has won a pair of national titles in that time frame and claimed the ACC Championship six times. Now Swinney is being rewarded for that.

The Tigers locked down their head coach to a 10-year, $115 million deal on Thursday morning.

Swinney becomes the second-highest paid coach in the country behind only Alabama’s Nick Saban. Ironically, the Alabama graduate and considered one of the favorites to replace Saban when he eventually steps away.

But fans across the country found the new contract amusing for a coach that has been critical of his players making money.

Same clown who always got something to say about NIL or transfer portal. Don’t know how people play for this dude

The hypocrisy is REAL!
Selling kids on a 2% fib yet pocket hundreds of Millies because he can! What a country!🤣🫣💰

In fact, almost everyone seemed to have the same thought.

But the players are still overpaid, right Dabo?

But he don’t wanna pay the damn athletes (many of them from poor, inner-city homes with disadvantaged socially economical situations) making him the $$. SMH. Never change Dabo.

Swinney and the Tigers began the 2022 season successfully with a blowout win over Georgia Tech. But the coach will have to earn his money. Clemson struggled offensively in the contest and fans quickly began to call for freshman quarterback Cade Klubnik.

But hey, that’s why he’s making the big bucks.