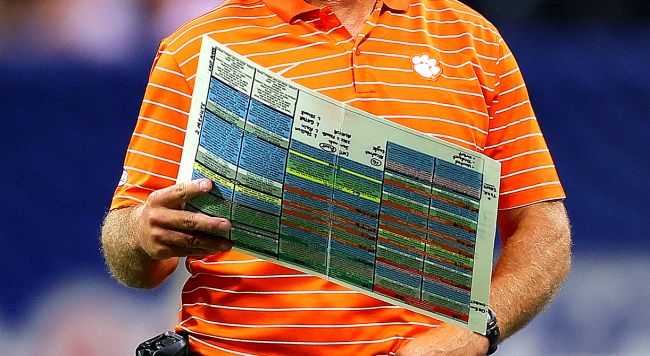 Monday night’s Clemson and Georgia Tech game closed out Week 1 of the 2022 college football season. The final score of 41-10 makes it sound like the Tigers dominated the Yellow Jackets for most of the night, but Clemson was only up 14-3 at the half and not looking very strong.

In fact, the Tigers’ offense was so stagnant at various points during the game that Clemson fans were already calling for Dabo Swinney to bench quarterback D.J. Uiagalelei in favor of freshman Cade Klubnik.

It only got worse after Klubnik entered the game late and engineered a touchdown drive, finishing 4-of-6 for 50 yards and a touchdown of his own. Uiagalelei went 19-of-32 for 209 yards with one touchdown during his time on the field.

While many fans, and even some in the media, were so focused on the Clemson quarterback situation Monday night, many other college football fans had something else related to the Tigers’ offense on their mind: Dabo Swinney’s gigantic play call sheet.

They’re not wrong. Although that wasn’t the only restaurant menu fans compared to Swinney’s play call sheet.

Dabo Swinney waiving around a Cheesecake Factory menu on the Clemson sideline,

Perhaps after losing offensive coordinator Tony Elliott, who took over the Virginia head coaching job this year, Swinney just wants to make sure he has all the bases covered when it comes to play-calling.

Then again, maybe Clemson’s first half offensive struggles were just a result of Dabo getting used to sorting through what everything on his giant play call sheet actually meant.

Dabo carrying around that huge play sheet talking into his headset.

“Tell me what the colors mean again?”

Did anyone hear him ask for the All-Star Special on his headset at any point during the game?

It’s going to be one heck of a fun college football season.